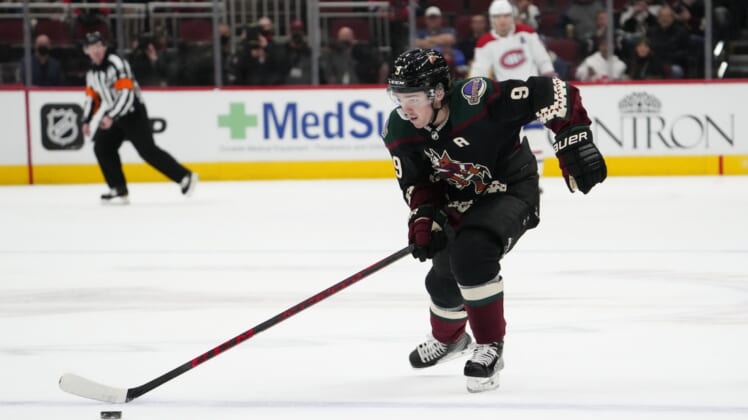 At the moment, the Montreal Canadiens and Arizona Coyotes aren’t playing like teams that have two of the three lowest point totals in the NHL.

Each team will try to build on its latest victory when the Canadiens host the Coyotes on Tuesday night.

Arizona’s 42 points are tied for last in the Western Conference, but the Coyotes own a 31-18 goal advantage while going 5-1-0 in March, including a 5-3 road win over the Ottawa Senators on Monday.

After dropping back-to-back games to the Vancouver Canucks and the expansion Seattle Kraken, the Canadiens rebounded by rallying for a 4-3 overtime victory at the Philadelphia Flyers on Sunday. With Montreal short-handed, Rem Pitlick tied the game with 43 seconds remaining in regulation, and then he assisted on budding star Cole Caufield’s goal 2:10 into the extra session.

“We’re have a lot of fun as a team,” said Pitlick, who has six goals and 10 assists in 23 games since the Canadiens claimed him off waivers from the Minnesota Wild in mid-January. “There’s a lot of connections, and we’re just trying to do our best.”

In addition to Pitlick’s solid play, All-Star Nick Suzuki scored twice Sunday, giving him seven goals and eight assists over the past 10 games. Meanwhile, Caufield, in his first full NHL season, has 17 of his 25 points over the past 14 contests.

Montreal’s Sam Montembeault stopped 27 shots while making his fourth straight start. He is 5-2-1 with a 2.92 goals-against average since Feb. 17, but he could give way to Andrew Hammond, who has a 2.26 GAA while winning all three starts since Montreal acquired him from Minnesota last month.

Pitlick scored and Montembeault turned aside all six shots he faced in relief during Montreal’s 5-2 loss at Arizona on Jan. 17.

Coyotes winger Lawson Crouse did not register a point in that contest, but he did record his first career hat trick on Monday. In his sixth NHL season, Crouse already has achieved career highs with 18 goals and 30 points.

“(Tuesday) is a huge game,” Arizona star Clayton Keller, who recorded a pair of assists Monday to top the 250-point mark for his career and extend his point streak to six games, told ESPN 620AM.

“Montreal is a young, skilled team. … We’re excited for the challenge and hope to close the trip on a (strong) note.”

Arizona’s Nick Schmaltz stayed hot with a goal and an assist on Monday. He has 12 goals and 13 assists over his past 13 contests. He also registered a goal and two assists in January against the Canadiens.

Teammate Scott Wedgewood made 40 saves Monday to win his third consecutive start. However, rookie Karel Vejmelka could be back in net on the second night of a back-to-back set. Vejmelka has a 2.01 goals-against average while winning two of his three starts this month.

The Coyotes did receive some tough news on Monday, when the club announced talented defenseman Jakob Chychrun could miss up to four weeks with a lower-body injury. The subject of trade rumors, Chychrun has seven goals and 14 assists in 47 games this season.