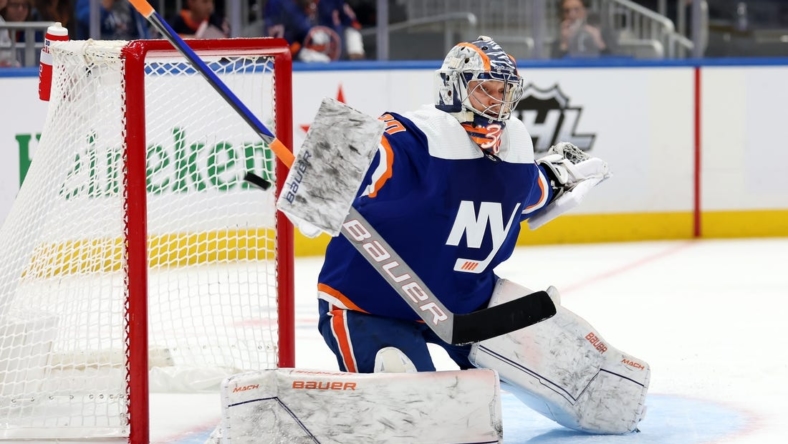 Karel Vejmelka stopped all 24 shots he faced in his second career shutout Thursday night, when Travis Boyd and Jack McBain scored in the third period as the Arizona Coyotes earned a 2-0 victory over the New York Islanders in Elmont, N.Y.

The shutout was the first of the season for the Coyotes, who are 3-0-0 on their month-long, 14-game trek necessitated by construction at Mullett Arena, the Arizona State facility where the team is expected to play for at least the next three seasons.

Ilya Sorokin recorded 27 saves for the Islanders, who fell for just the second time in nine games. Both defeats were by shutout for New York, which lost to the Detroit Red Wings 3-0 on Saturday.

The teams were a combined 0-for-3 on the power play before the Coyotes took advantage of Josh Bailey being whistled for holding with eight seconds left in the second period.

J.J. Moser began setting up the goal by dishing from just in front of the blue line to Clayton Keller, who skated into the front of the left faceoff circle as Boyd got behind the Islanders’ Scott Mayfield and in front of another defenseman, Adam Pelech.

Keller’s pass into the crease landed on the stick of Boyd, who flicked a shot over Sorokin’s pad exactly one minute into the final period.

The Islanders peppered Vejmelka just before and immediately after pulling Sorokin in the final two minutes. Ryan Pulock was wide of the net on a pair of shots prior to Sorokin skating off with 1:38 left.

Vejmelka made a glove save of a shot by Noah Dobson with 44.2 seconds remaining before McBain iced the victory by scoring into the empty net with 30.5 seconds left.