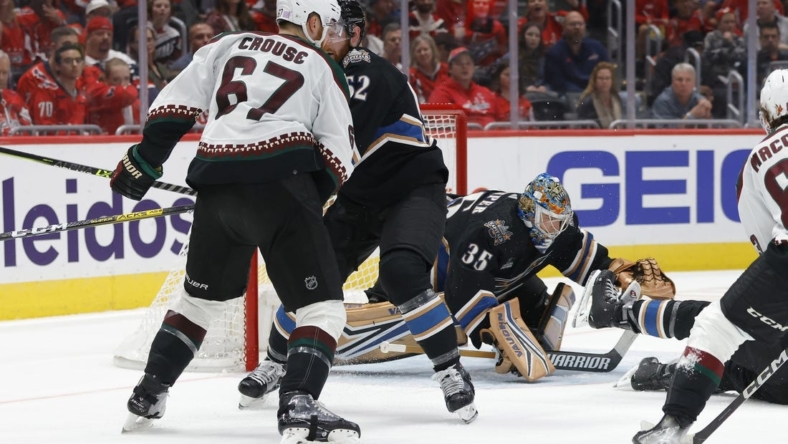 Nick Ritchie capped a two-goal performance by scoring with 35.4 seconds remaining in the third period on Saturday, as the Arizona Coyotes overcame Alex Ovechkin’s NHL-record 787th goal with one franchise to post a 3-2 victory over the Washington Capitals.

Anthony Mantha set up that goal and scored one of his own before the Coyotes stormed back. Josh Brown cleaned up a loose puck in front at 6:33 of the third period. Ritchie’s first goal of the game sailed just under the crossbar and over the goal line to forge a tie at 9:45.

Arizona netted the winner after Barrett Hayton’s shot from the slot was denied by former Coyotes goaltender Darcy Kuemper. The puck trickled behind the goaltender and Ritchie alertly tapped it home at the left doorstep for his team-leading sixth goal of the season.

Defenseman Shayne Gostisbehere notched two assists and Karel Vejmelka turned aside 34 shots for Arizona, which opened its NHL high-tying 14-game road trip on Saturday. The Canucks also had a 14-game trek during the 2009-10 season as a means to accommodate the 2010 Winter Olympics in Vancouver.

Defenseman Trevor van Riemsdyk notched an assist and Kuemper made 23 saves for the Capitals, who have scored just seven goals during their four-game winless skid (0-2-2).

With Washington on its third power-play of the game, Ovechkin opened the scoring with the fifth of his team-leading seven goals in his last seven games. Van Riemsdyk slid a pass deep into the left circle that Ovechkin one-timed past Vejmelka.

The Capitals doubled their advantage at 3:23 of the third period, courtesy of a fortunate bounce in the offensive end.

Gostisbehere’s pass from behind the net caromed off the skate blade of fellow Arizona defenseman Dysin Mayo, allowing Mantha to swiftly backhand the puck past Vejmelka.