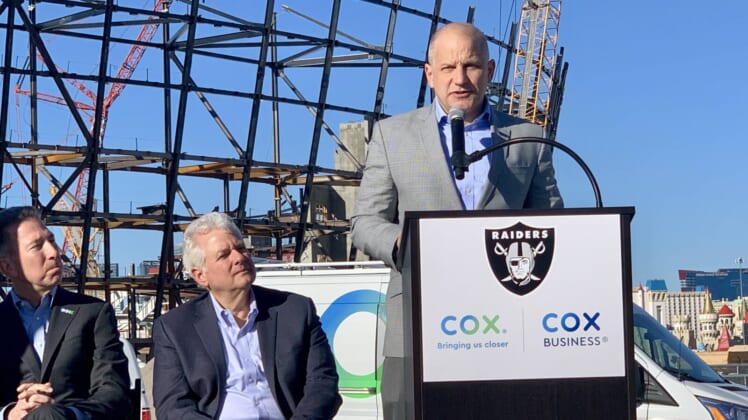 At a press conference held at the site of the Raiders future $1.8 billion stadium, the team and Cox Communications announced a 10-year business deal establishing the cable provider as a founding partner of Las Vegas Stadium.

The Raiders and Cox Communications announced today a 10-year deal to be one of the team’s founding partner and to also provide “multiple gig-speed bandwidth to fans and stadium operations alike, ensuring high-speed connections for visitors and staff,” the team and Cox announced at a joint press conference today.

Set against the backdrop of the rapidly evolving structure of Las Vegas Stadium, the announcement is the second since Caesars Entertainment jumped in with a similar deal late last year.

Raiders president Marc Badain said the partnership with Cox was a natural as both organizations think and act alike – especially with a community-first approach.

“The fact that Cox was interested in partnering with us and becoming a founding partner of Las Vegas Stadium and a key partner with the Raiders was both personally and professionally exciting,” Badain said. “They’re a company that shares our values, they operate with integrity, they’re a family company and they take care of their employees.”

The deal not only covers providing the technology backbone for the team at fans at the stadium, but also extends to the Raiders new headquarters and practice facility in Henderson. The focus at the stadium is to provide a seamless and robust experience for fans who increasingly require a demanding amount of wi-fi bandwidth.

“Las Vegas is the sports and entertainment capital of the world, but it’s also becoming one of the smartest and most connected cities in the world,” said Pat Esser, president, Cox Communications. “The new Las Vegas Stadium will perfectly complement this progression and could become the smartest gridiron yet.”

Although it’s early in the technology phase of stadium construction, Cox officials said the new Raiders stadium will have arguably the best technology in the NFL allowing for augmented reality experiences, interactive mapping, and team featured technology.

The Raiders news stadium is slated to open at the end of July 2020. The team’s first game will be played in August 2020.