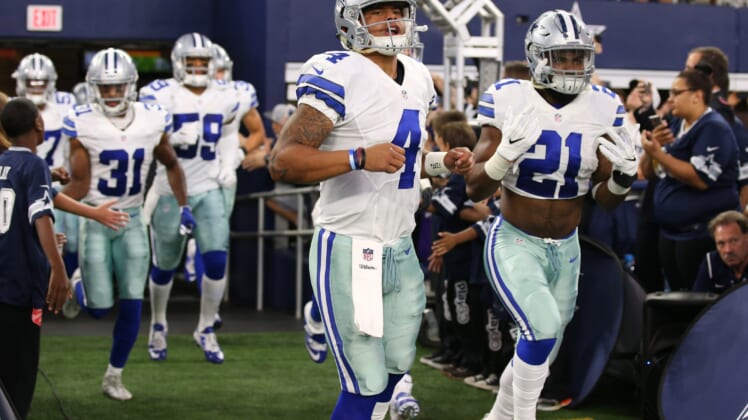 Dallas Cowboys owner Jerry Jones has remained loyal to Tony Romo throughout the season. But following Sunday’s come from behind win over the Philadelphia Eagles, Dak Prescott might have won Jones over.

“Cowboys owner Jerry Jones said Sunday quarterback Dak Prescott will start this week against Cleveland,” Bleacher Report’s Jason Cole said. “Due in part to his excellent performance on Sunday and the fact that Tony Romo is not ready. One team source said that it’s increasingly likely that Prescott will keep his job over Romo, especially if he can play well against a tough Minnesota defense on December 1.”

One is that this should be obvious. Prescott is a rookie on pace to throw for over 4,000 yards, 21 touchdowns and only five interceptions. He’s been stellar all season. Romo has had a fantastic career but is 36 and has been plagued with injuries throughout the last few seasons. Prescott also gives Dallas mobility that Romo can’t really offer anymore. Unless his game goes completely south, Prescott should be the starter as long as he remains healthy.

The second thought revolves around that December 1 game. Reading between the lines, we can safely assume that the job will be Prescott’s until that game. What exactly happens if Prescott plays poorly? It’s on the road against one of the NFL’s best defenses, a rough outing isn’t exactly impossible.

If that happens, does Romo become the starter for the rest of the season? Dallas has only four games to play after the Minnesota game. Would the Cowboys then go to an ice cold starter who, by that point, wouldn’t have played in a meaningful NFL game in more than a year?

If Prescott is starting that game, he needs to be the starter for the rest of the year with the only qualifier being his health. Benching Prescott in favor of Romo now makes little sense. Still, waiting until December to do so would be much worse.