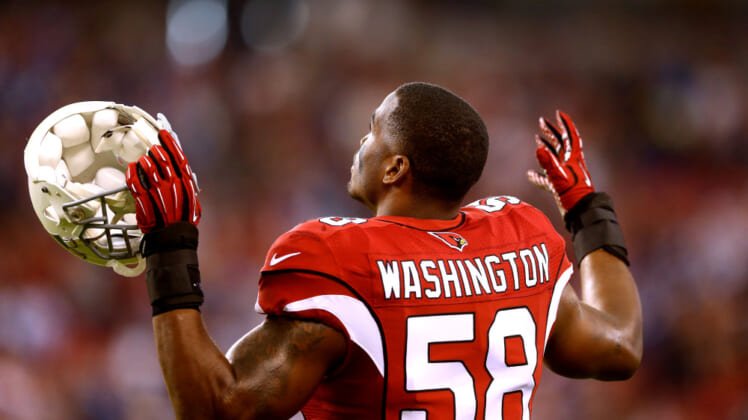 The Dallas Cowboys always seem to be willing to give high-risk players another chance. Jerry Jones and Co. are at it again, reportedly doing “homework” on recently reinstated linebacker Daryl Washington, who missed three years due to off-field issues.

Washington was suspended indefinitely for repeated violations of the NFL’s Substance of Abuse Policy. He hasn’t played since the 2013 season. But that’s not the biggest reason the Cowboys should avoid signing Washington. In addition to his drug issues, he also has a history of abusing women.

Pleaded guilty to assault and received probation in 2014. pushed ex-girlfriend, who suffered a broken collarbone. 1 reason for 3 year susp.

The Cowboys already played with this particular brand of fire and got burned when information about Greg Hardy turned up and then he out to be not so reformed after all on top of it.

But in general, perhaps Dallas should just take a step back and stop giving so many high-risk players a chance. On the one hand, Jones is obviously a guy who has helped players with troubled pasts, and that’s great.

But he’s also repeatedly seen this approach blow up in his face. Just in recent years we’ve seen the likes of Rolando McClain, Randy Gregory, Hardy and others continue to get into trouble, creating not only a problem on the roster but a problem when it comes to public relations.

The Dallas Cowboys are one of the most popular sports teams in the world. What they do is seen on a global scale. So continuing to bring in players that bring shame to the organization, rather than lift it up, just isn’t a good look.

Now, when healthy and out of trouble, Washington was an All-Pro linebacker for the Arizona Cardinals. He’s a do-it-all guy who can make plays all over the field.

But continuing to value potential production over standards you can be proud of is going to end up burning the Cowboys more than it helps them. Perhaps Washington does deserve a second chance. But the Cowboys (and the Cincinnati Bengals, for that matter) shouldn’t be the team to give it to him.