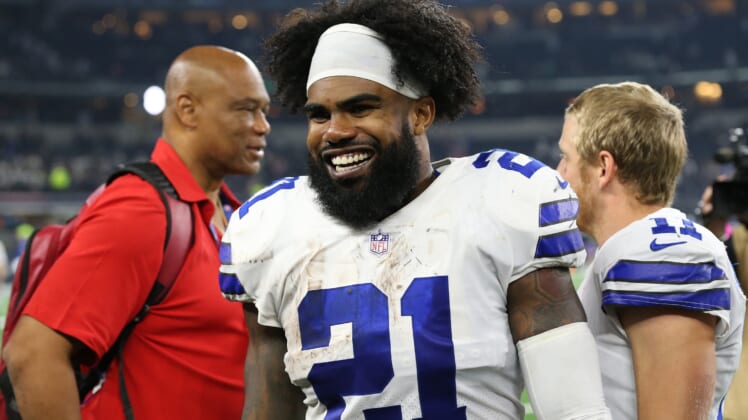 Former Dallas Cowboys running back Emmitt Smith is considered one of the greatest players at his position in the modern history of the game.

The Hall of Famer suited up in Dallas from 1990-2002, helping the Cowboys to three Super Bowl titles during a career that included eight Pro Bowl appearances.

The running back’s name is synonymous with the Cowboys. When he talks America’s Team, we listen.

Smith did just that ahead of their preseason finale against the Tampa Bay Buccaneers Thursday night. In particular, Smith opened up about Ezekiel Elliott’s holdout. He did not toe the company line.

“If he (Elliott) doesn’t do it now when the league it talking about devaluing the running back position and he’s proven he can carry the ball 350 plus times on a consistent basis, there aren’t many backs in the National Football League that can do that,” Smith said on 105.3 The Fan (h/t ESPN’s Todd Archer).

The devaluation of the running back in today’s NFL is something we’ve covered a great deal recently. It has included both Elliott and Chargers holdout ball-carrier Melvin Gordon.

Smith’s point is that Elliott should take a stand to help those will will come after him. That’s especially true when we’re talking about generational talent.

“We have one on our team and there’s another one up in New York (Saquon Barkley) and you’d be hard-pressed to find someone else. When you have those caliber of backs on your squad, they’re unique individuals. He deserves to be paid like that,” Smith said.

Smith himself held out throughout preseason and the first two regular-season games back in 1993. Dallas ultimately ended up making him the highest-paid running back in NFL history. In turn, Smith earned the regular-season MVP and the Super Bowl XXVIII MVP award en route to leading the Cowboys to a title.

Dallas has to be hoping history repeats itself more than a quarter-century later. But things are not looking great on the Elliott holdout front.

At the very least, he has a supporter in one of the greatest players in franchise history.