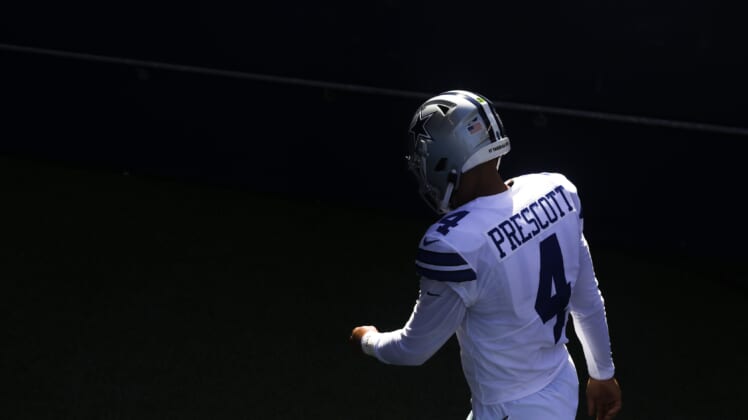 After putting up north of 4,900 passing yards last season, Dallas Cowboys quarterback Dak Prescott is once again off to an historical start.

He’s coming off two consecutive games in which the signal caller has thrown for 450-plus yards. Prescott joins Jameis Winston as the only two figures in NFL history in that category.

Despite this, Dallas heads into Week 4 against the Cleveland Browns with a 1-2 record. There’s been some major struggles on both sides of the ball under first-year head coach Mike McCarthy. Prescott touched on that following Dallas’ 38-31 loss to the Seattle Seahawks this past Sunday.

“Continuously, looking at it the last three weeks, we’re only stopping ourselves,” Prescott told reporters, via the Cowboys’ official website. “We have to get out of our own way, be cleaner with the ball, play smarter football and find a way to start faster. Our coaches and these players are going to go back and figure out a way to get this thing right and clean it up.”

It’s really hard to argue against this. McCarthy has struggled at times in terms of in-game management. That was clear during the Cowboys’ Week 1 loss to the Los Angeles Rams.

As for what we’ve seen throughout the first three games of the 2020 NFL season, there seems to be a trend. It’s not great for the Cowboys.

While Prescott will more than happily take on the blame, it really has not been for a lack of performance on the quarterback’s part.

In addition to putting up 450-plus passing yards in each of the past two games, Prescott looks every bit the part of an MVP candidate heading into Week 4. He just needs some help from the rest of his team, primarily the coaching staff and the defensive side of the ball.

The reliance on Prescott has been a major issue with Ezekiel Elliott (3.8 yards per attempt this season) struggling to an extent. The good news for Dallas is that its schedule lightens up a bit over the next few weeks.

Despite this, Prescott is dead on. The Cowboys simply need to get out of their own way if they are going to improve off this 1-2 start to the 2020 NFL season. The status quo is in no way sustainable, even in a weak NFC East.