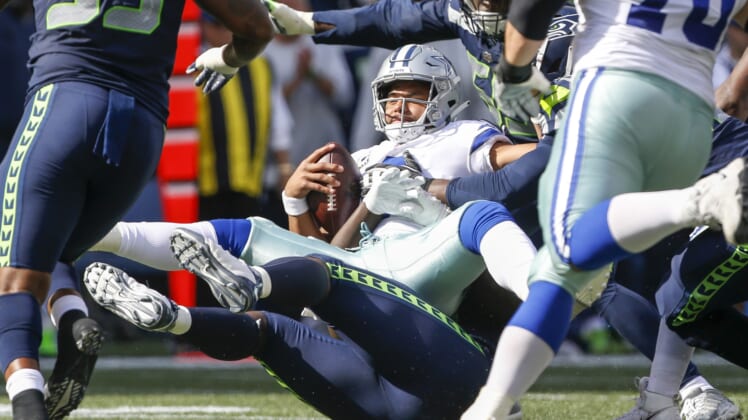 The NFL made news once again on Thursday by announcing that its controversial new quarterback hit rule will not be changed prior to the end of the 2018 season.

One prominent NFL agent put the league on blast while a star player decided to call the NFL out in a big way.

Whether it was in jest or something completely different, Dallas Cowboys quarterbak Dak Prescott weighed in the controversy with a pretty odd take.

Dak Prescott asked about the NFL's new roughing the passer calls: "I need to sit in the pocket and let them hit me more. Simple as that."

“I need to sit in the pocket and let them hit me more,” the struggling quarterback said, via Jon Machota of The Dallas Morning News. “Simple as that.”

Some might agree. Part of Prescott’s struggles this season is due to the fact that he’s been uncertain in the face of pressure. It’s led to him escaping the pocket far too often. Though, we’re pretty sure that’s not where he was going here.

Hanging in the pocket and getting hit won’t necessarily lead to the end result Prescott is expecting. Defenders have still been penalized at an alarming right in those situations. Heck, most of the roughing the passer penalties have come with quarterbacks in the pocket.

Through three weeks, there’s been roughly twice as many roughing the passer penalties called than at this point in each of the past two seasons.