Cowboys can move closer to clinching NFC East vs. Giants 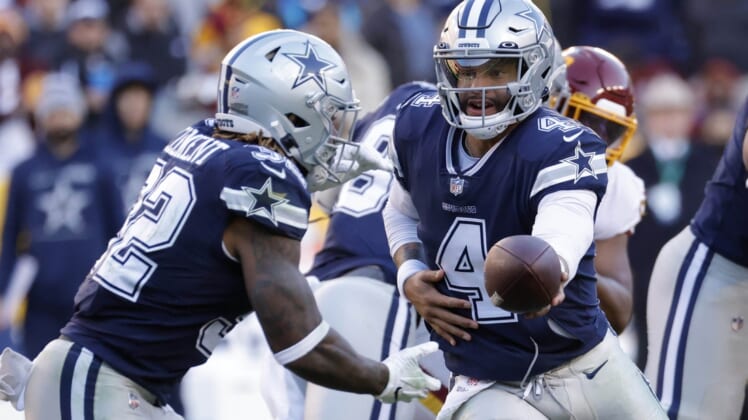 The Dallas Cowboys routinely have taken the New York Giants to task in their recent encounters.

Should the Cowboys (9-4) record their ninth win in the last 10 meetings with the Giants (4-9) on Sunday in East Rutherford, N.J., they’ll give themselves a chance to wrap up the NFC East title.

Dallas, which posted a 44-20 victory over New York on Oct. 10, can clinch the division title with a win on Sunday and a tie between the Washington Football Team and Philadelphia Eagles. The Cowboys can also capture the NFC East with a win and a loss by Washington as well as a strength-of-victory tiebreaker over the Eagles.

While the strength-of-victory tiebreaker involves a complicated formula, the more pressing math for the Cowboys involves the health of their two primary running backs. Ezekiel Elliott said he had no issue with his ailing knee after rushing 12 times for 45 yards in Dallas’ 27-20 victory over Washington on Sunday, a game in which fellow running back Tony Pollard sat out with a foot injury.

“I thought Zeke came out of that game good. His communication has been that he’s ready to go,” Cowboys coach Mike McCarthy said of Elliott. “If we were having a full-blown Wednesday practice, I would say he’d be in a full capacity.”

Elliott rushed for 110 yards with two touchdowns (one rushing, one receiving) in the previous meeting with New York, while Pollard rolled up 103 scrimmage yards (75 rushing, 28 receiving) on that day. McCarthy initially said that Pollard would be limited in practice on Wednesday, however the latter joined left tackle Tyron Smith (ankle) in failing to participate.

Smith is expected to miss his fourth game of the season on Sunday.

The lingering question of the health of Dak Prescott continues to circle around the Cowboys. Prescott has been limited to just two touchdown passes and three interceptions during Dallas’ two-game winning streak.

Taken a step further, Prescott is averaging 261.3 passing yards per game with eight touchdowns and six picks in his last six games since returning from a calf injury after averaging 302.2 yards with 16 TDs and four interceptions in his previous six. Included in the earlier stretch is a 302-yard performance with three touchdowns in the encounter with the Giants.

“I don’t want to say (it’s a) slump, but that’s probably fair,” Cowboys owner Jerry Jones said of Prescott’s recent play on 105.3 The Fan in Dallas. “But it’s such a multifaceted evaluation that I would say our offense is definitely away from where we were playing five and six games ago from the standpoint of production. … Yes, he is (healthy). He’ll figure it out.”

The Giants likely will figure on Mike Glennon starting a third straight game with fellow quarterback Daniel Jones nursing a neck injury. Glennon threw for two touchdowns and rushed for another in New York’s 37-21 setback to the Los Angeles Chargers last Sunday.

“Mike is going to start the game for us,” Giants coach Joe Judge said Wednesday. “This isn’t being coy or anything. Every player who’s at the game can play, and we have plans for every player within a role of what they would do. Do we have anything bracketed out at this point in terms of is (backup Jake Fromm) going to play certain plays or anything? We do not. We do not, so we’re getting Mike ready to play the game, but Jake will also be getting ready and preparing to play the game.”