Could this year’s Warriors team be their most dominant? 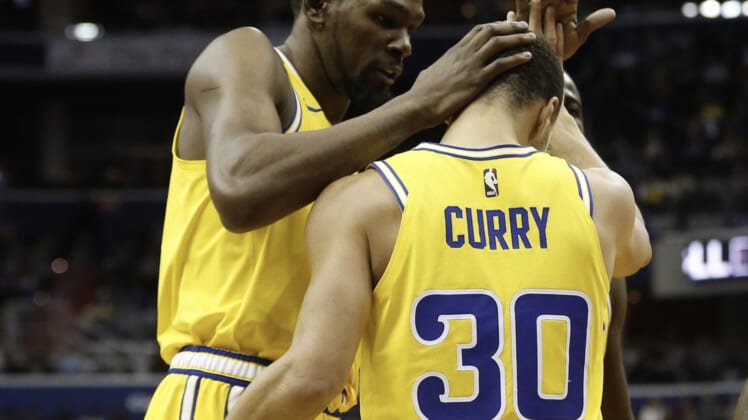 It didn’t start out that way. Seemingly uninterested in playing regular-season basketball, the two time defending NBA champs sputtered to a 25-14 start to the campaign.

While most teams would take a 53-win projection and run with it, the Golden State Warriors are not your normal NBA team. Here’s a squad that posted a 265-63 record during Steve Kerr’s first four seasons as head coach.

Needless to say, the star power in Oakland and Kerr’s excellent coaching set high standards for these Warriors. That’s why it was so surprising to see the team start out slow.

Fast forward a couple weeks, and these Warriors are back in their rightful place atop the NBA world. Winners of 10 consecutive games, Golden State looks as dominant as ever.

It seems like a long shot idea on the surface. Golden State needs to win 25 of its final 33 games to even reach the 60-win plateau for the fourth time in five seasons. But basic wins and losses don’t even come close to telling us the entire story.

Instead, what we’re witnessing from the Warriors right now is downright domination — a domination that has made the NBA a bit less interesting to the common fan.

Offensively, it’s just been mind-boggling. Check out the following league-wide rankings for these Warriors

The past 10 games have been even more ridiculous. Having won each of those matchups, the Warriors are coming out on top by an average of 16 points per outing. That very same span has seen the team average nearly 130 points per game.

#DubNation stars are out during 10-game winning streak.

The trio is averaging 80.8 points per game on 50-plus shooting from the field and 45-plus from distance.

Some might not think that this is sustainable. That’s until we factor in Mr. Boogie Cousins. His presence on the low block makes everything else easier for these three All-Stars. Teams have just recently understood that they can’t double Cousins inside with the sharpshooters the Warriors boast out on the perimeter.

Once Cousins regains more of his strength after sitting out nearly a calendar year, this will make the Warriors’ offense nearly unstoppable. His offensive rebounding being a major component in all of this.

Add in the game’s best passing power forward in Draymond Green, and this front-court duo is primed to dominate moving forward. No team in the modern history of the game has had five starters with a plus-level ability to pass the ball.

Earlier in the season, Golden State was getting bogged down by going isolation with Durant late in the game. That might have worked to an extent in Oklahoma City, but these Warriors are a different monster. More than any team in recent years, they rely on expert-level ball movement.

Having five All-Stars in the starting lineup helps. Having five players that can actually pass the ball from every position on the court takes this to an entirely new level. Consider this: Golden State is averaging north of 33 assists during its 10-game winning streak.

In order to beat the Warriors, teams will have to play their brand of basketball. They can’t slow it down with an expectation of success. They can’t go hero ball (Harden) and expect to keep up with the pace.

That’s during the regular season.

Once the playoffs coming calling, an opposing team will have to win four of seven against the Warriors. That’s almost an impossible task in today’s NBA.

It’s really not about overall stats or wins. These Warriors won’t match their 73-win season from a few years back. They might lose more than one or two games in the postseason.

Even then, the product we’re seeing on the court right now makes this the most-dominant Warriors team of their dynasty. That’s only going to be magnified further as Cousins feels more comfortable in the system and the Warriors’ schedule weakens as the season progresses.