Could 49ers star George Kittle opt out in 2020 without a contract extension? 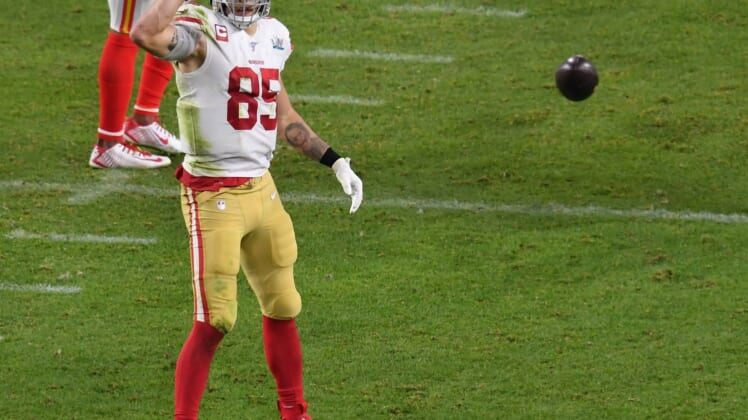 The San Francisco 49ers and star tight end George Kittle remain far apart in contract extension talks. Could that result in Kittle not playing this season?

NFL Network insider Michael Silver, who has been very plugged into the Kittle contract situation this offseason, isn’t dismissing the notion that the tight end could opt out without a new deal.

Appearing live to discuss Kittle and the 49ers, Silver openly wondered whether that’s on the table.

For what it’s worth, the 49ers believe Kittle will not take this route. They also believe that a deal will get hammered out sooner, rather than later.

Whether any of that blossoms into reality remains to be seen.

Should George Kittle be paid like a tight end or a receiver? Stats don’t lie

At the crux of the matter is the simple fact that the 49ers and Kittle appear to view his worth through different lenses.

The 49ers, per Silver, want to set a new tight end market. Currently, Austin Hooper ($10.5 million per year) is making the most annually on a long-term contract. Clearly, Kittle will make much more than that whenever he gets his new deal.

But just how much more will he get?

Previously, Kittle’s agent had communicated he’s working on a deal that is unlike any other tight end contract in the league. Essentially, Kittle’s side believes he is much more than just a tight end.

And the tape shows that to be true.

Kittle is clearly one of the most dangerous pass-catching tight ends in the NFL. The past two seasons, he’s caught 173 passes for 2,430 yards and 10 touchdowns — setting an NFL record along the way.

He’s also one of the most dominant run blockers in the league, and that includes top offensive linemen.

Because Kittle is the engine that makes the 49ers offense run so smoothly, the 49ers need to figure out a way to make him happy. The alternative would be a devastating blow to a team many believe is going to be a Super Bowl contender once more in 2020.