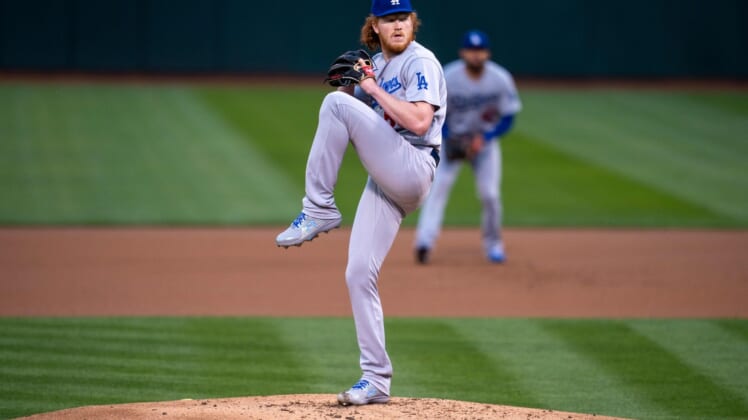 Corey Seager continued his torrid start with a three-run double and Will Smith hit his second home run in as many days, backing the strong pitching of right-hander Dustin May in the Los Angeles Dodgers’ 10-3 shellacking of the host Oakland Athletics on Monday night.

Zach McKinstry also had three RBIs, while he and Max Muncy collected three hits apiece for the Dodgers, who opened the three-game interleague series with a fourth straight win.

Mark Canha’s second hit, an eighth-inning homer off David Price, avoided a shutout for Oakland. The homer was Canha’s first of the season.

While May (1-0) was limiting the A’s to two hits in six shutout innings, the Dodgers jumped all over Oakland starter Frankie Montas (0-1) for four runs in the second inning and three more in the third to get the blowout rolling.

McKinstry got the scoring going with a sacrifice fly in the top of the second. One batter later, Seager bombed a bases-loaded double to center field, clearing the bases and increasing the Los Angeles lead to 4-0.

Montas couldn’t get out of the third inning, which included Smith’s solo homer, an RBI single by McKinstry and a run-scoring wild pitch.

Montas was charged with seven runs on seven hits in 2 2/3 innings. He walked three and struck out four.

May had no problem retaining the big lead, allowing just a leadoff single to Canha in the first, a walk to Matt Olson later in the inning and a walk to Tony Kemp in the second before retiring 11 in a row.

He completed his six innings with two walks and eight strikeouts.

The Dodgers tacked on single runs in the seventh on McKinstry’s run-scoring single, his third RBI of the game, the eighth on a solo homer by Justin Turner, his first of the season, and the ninth on a run-scoring infield hit by Turner, capping a two-RBI game.

Turner finished with two hits for the Dodgers, while Muncy and Chris Taylor scored twice.

Los Angeles has scored 31 runs in its four-game winning streak.

Matt Chapman had a run-scoring single and rookie Ka’ai Tom his first career hit and RBI in a three-run eighth inning for Oakland, which was hosting the Dodgers for the first time since August of 2018.

Oakland has been outscored 45-12 this season.