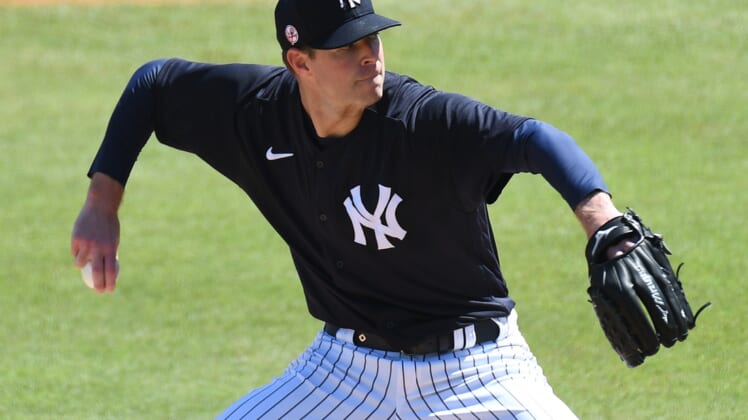 When the New York Yankees struggled to get clutch hits last season, the piped-in crowd-noise soundtrack did not include boos during the 60-game sprint of a schedule while the midst of the COVID-19 pandemic.

In their home opener Thursday, the Yankees struggled immensely to produce big hits and they will attempt to rebound from a disappointing initial showing Saturday afternoon when they again play host the Toronto Blue Jays in the middle game of a three-game series.

The Yankees welcomed 10,850 fans back in the stands for Opening Day and the intimate gathering made its feelings known. Other than Gary Sanchez’s two-run homer, there were few offensive highlights during the 3-2 defeat in 10 innings. New York struck out 13 times, went hitless in nine at-bats with runners in scoring position and 3-for-19 with runners on.

The most noticeable booing occurred when Giancarlo Stanton struck out in the eighth inning and again for the second out in the 10th. Stanton was with 0-for-5 and struck out in his final three at-bats.

It was the first time fans watched the Yankees in a meaningful game since a 4-1 win over the Houston Astros in Game 5 of the 2019 American League Championship Series when more than 48,000 were in the stands. This time, the small group was required to show proof of complete vaccination at least two weeks earlier or a recent negative COVID-19 test.

The Blue Jays are hoping to produce more frustration for the Yankees after Randal Grichuk hit the tiebreaking double over Judge’s head in right field in the 10th inning. Grichuk’s hit occurred on a day when teammate Julian Merryweather needed 11 pitches to strike out the side for his first career save.

Merryweather’s save capped a day when Toronto received stellar relief pitching after Hyun-Jin Ryu allowed two runs in 5 1/3 innings. The effort was highlighted by David Phelps retiring Judge on a double play to end the seventh after the Yankees loaded the bases.

That double play was also part of a standout defensive day for Toronto, which saw Marcus Semien make a diving stop to rob LeMahieu of a hit in the fifth and a trimmed-down Vladimir Guerrero Jr. play effectively at first base.

“That was our goal from the beginning,” Toronto manager Charlie Montoyo said. “I told our team for us to win and get to the playoffs and do well during the season, it’s going to be pitching and defense.”

Corey Kluber will make his debut for the Yankees after signing a one-year contract following his January showcase. Kluber pitched one inning for the Texas Rangers last season before injuring his shoulder.

“To me, I know what I want the ball to feel like coming out of my hand when things are right and then on top of that, judging the way hitters are reacting to pitches and stuff like that,” Kluber said. “I think both of those things went well, where I would want them to be. So that’s kind of the biggest thing for me.

Kluber’s last healthy season was 2018 when he won 20 games. In 2019, he was limited to seven starts with Cleveland due to a fractured right arm and abdominal tightness.

Kluber is 2-3 with a 4.46 ERA in six career starts against Toronto.

Ross Stripling will start for the Blue Jays after going 0-2 with a 6.32 ERA in five appearances for them last season after a trade from the Los Angeles Dodgers. Stripling, who will be making his first career start against the Yankees, is 0-2 with 4.50 ERA in three career relief appearances against New York.