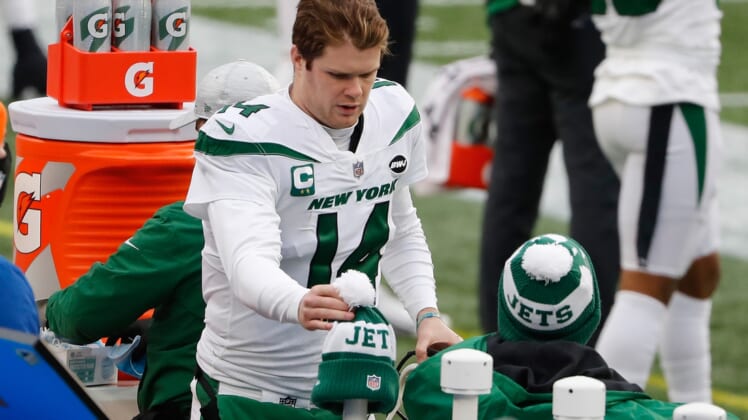 The New York Jets hold the No. 2 overall pick in the 2021 NFL Draft, yet newly-arrived receiver Corey Davis is saying Sam Darnold will be the team’s quarterback going forward.

It’s widely believed Darnold will get a fresh start elsewhere and that the Jets’ new coaching staff led by Robert Saleh will seek a new field general. However, Davis’ remarks run in stark contrast to that presumed strategy.

SNY’s Ralph Vacchiano reported on Davis’ comments to the media about Darnold’s future in New York, which suggests the Jets may pivot in an unexpected way on draft day:

Davis just signed in free agency after beginning his NFL career with the Tennessee Titans. He’s on a three-year contract with the Jets, and the former high first-round pick is expected to be the team’s No. 1 receiver.

Whether that means Davis will be hauling in passes from Darnold or someone like BYU product Zach Wilson remains to be seen.

If it’s really true that the Jets are going to roll with Darnold under center, that means he will have survived multiple general manager changes, a third different coaching staff and won’t be cast off in favor of a cheaper, younger signal-caller.

Darnold has always had the high-end talent to be a productive NFL starter. The problems that have plagued him in New York are largely out of his control: the aforementioned organizational turnover, and the resulting lack of unity that’s given the Jets a woeful roster to work with in recent years.

But some of the bad habits that Darnold had coming out of USC have followed him to the pros. He’s pressed too often and made his share of ill-advised throws, and his sub-60% completion rate leaves something to be desired, particularly with a career 5.9 air yards per pass attempt.

By at least publicly hinting at their commitment to Darnold — albeit through Davis — Gang Green may be hiking up the league-wide perception on the 23-year-old. That could yield superior trade compensation and provide New York with yet another asset to continue upgrading its roster.

Then, of course, the opening is still there to acquire Zach Wilson, who’s the expected No. 2 pick in most mock drafts.

On the other hand, maybe there’s some veracity and validity to the Jets’ belief in Darnold. He’s still super young, had to suffer through the Adam Gase coaching era and hasn’t had anyone even of Davis’ caliber to throw to during his three years as a pro.

New York can hang onto Darnold and get an absolute king’s ransom of draft picks and possibly an established star player to trade out of the No. 2 overall spot. General manager Joe Douglas also has the 23rd overall pick to play with, not to mention the second selection in Round 2 and two third-round choices.

Because Wilson is garnering so much hype as the probable QB2 of the 2021 class behind Clemson’s Trevor Lawrence, the interest in trading up with the Jets is only going to increase.

Of course, the risk is that Darnold is a damaged-goods product by this point and may not ever recover from the rough years he endured in New York leading up to 2021. Should that be the case, and the Jets pass on someone like Wilson or another top prospect who winds up being a superstar, it’d be absolutely devastating.

This franchise really hasn’t had a true, viable long-term quarterback since Joe Namath. That’s a long time. The opportunity to draft second overall doesn’t come very often, and ideally won’t for the Jets for a long time after this.

Darnold was the third pick in the 2018 draft, and the new leadership must make sure it still sees that type of potential in him to justify retaining him as Davis claims they will.