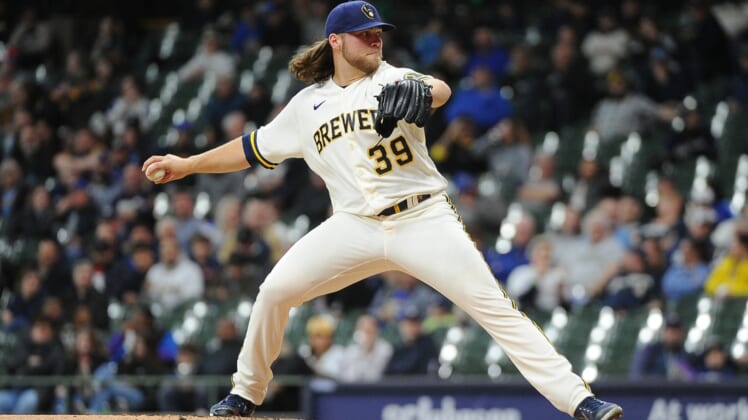 Corbin Burnes allowed two runs in seven innings and Rowdy Tellez smacked a two-run homer to pace the host Milwaukee Brewers to an 5-2 victory over the Pittsburgh Pirates on Tuesday night.

Burnes (1-0) allowed just two singles through the first five innings, then gave up solo homers to Daniel Vogelbach in the sixth and Josh VanMeter with two outs in the seventh.

Burnes gave up four hits, striking out 10 and walking none — the 13th 10-plus strikeout game of his career. Devin Williams, who struggled in his last two outings, pitched a perfect eighth, and Josh Hader retired three straight in the ninth for his fifth save in as many chances.

The Brewers did all their damage against JT Brubaker in a four-run second inning on just two hits with the aid of an error. Brubaker (0-2) allowed four runs, two earned, on two hits in five innings, striking out six and walking two.

Hunter Renfroe opened the seventh with his first homer with Milwaukee, a solo shot to left off Roansy Contreras, to put the Brewers up 5-2.

Milwaukee won despite being outhit 4-3 by the Pirates, who also outhit the Brewers 8-6 in Monday’s 6-1 loss. The Brewers also had a big inning Monday, a five-run fourth keyed by Christian Yelich’s grand slam.

The Brewers on Tuesday scored four runs in the second on just two hits, including Telez’s two-run homer. Andrew McCutchen, who played his first nine seasons with the Pirates, walked to open the inning. Telez then ripped a 2-0 pitch 424 feet to right for his second homer.

The three-game series concludes with an afternoon game Wednesday.