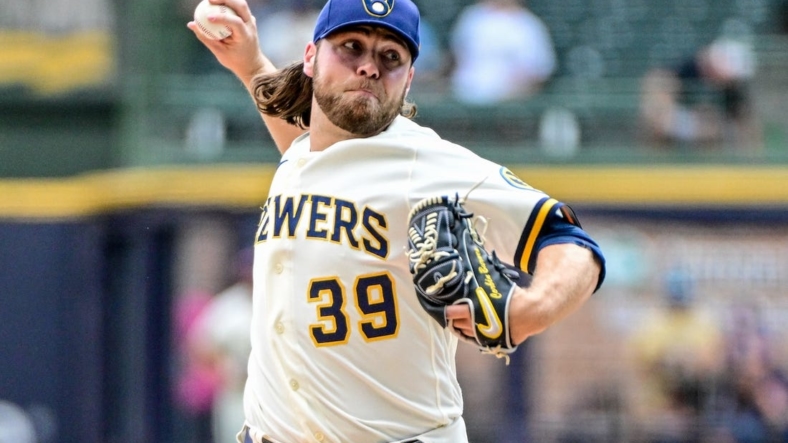 Corbin Burnes allowed just one run on three hits over eight innings with 14 strikeouts to pace the Milwaukee Brewers to a 2-1 victory over the visiting San Francisco Giants in the first game of a doubleheader Thursday.

Burnes (10-6) allowed a run on a single and a double in the third. The only other hit was a single in the eighth by David Villar, who was erased on a double play. Burnes also hit one batter, but did not walk anyone in his 100-pitch outing.

According to the team, Burnes’ 14 strikeouts were tied for third-most in a game in team history. Ben Sheets holds the team record with 18 and Burnes himself had a 15-strikeout outing last year.

Burnes, last year’s National League Cy Young winner, had struggled in his last two starts, allowing 10 runs in 11 2/3 innings. It was his ninth game this season with 10 or more strikeouts.

Devin Williams pitched a perfect ninth for his 11th save in 12 opportunities for the Brewers (72-65).

Milwaukee erased a 1-0 deficit with two runs in the fourth off Jakob Junis (4-5). Jace Peterson opened with a pinch-hit single and stole second. Christian Yelich’s one-out double to left-center scored Peterson. Hunter Renfroe followed with an RBI ground-rule double down the left-field line.

The Giants (65-71) scored one in the third when LaMonte Wade Jr. singled with two outs and Mike Yastrzemski followed with an RBI double to the gap in right-center.

Junis, who came in after Scott Alexander pitched one scoreless inning to open the game, allowed two runs on three hits in six innings, striking out four and walking two.

Right-hander Freddy Peralta (4-3, 3.56 ERA) will start the nightcap for the Brewers, coming off a 2-5 road trip, while San Francisco had not named a second-game starter.