Cooper Kupp, Rams get by Seahawks 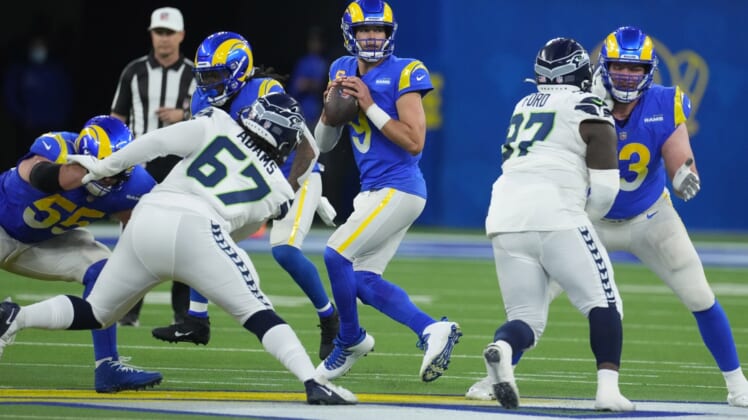 The Rams (10-4) won their third game in a row and moved into a tie with Arizona for first place in the NFC West.

The Seahawks (5-9) had a two-game winning streak snapped and their wild-card playoff hopes dimmed even further. The Seahawks are assured of a losing record for the first time in Russell Wilson’s 10 seasons.

The Rams broke a 10-all tie on Kupp’s 29-yard touchdown reception with 10:48 remaining, capping an eight-play, 88-yard drive.

It seemed the Seahawks were going to get good field position when the Rams’ third-and-12 play from their own 10 came up short, but Seattle cornerback Blessuan Austin was called for holding Kupp before the pass was thrown. That gave the Rams an automatic first down, and they moved quickly down the field for the go-ahead score.

Matt Gay added a 35-yard field goal with 1:51 left to clinch the victory.

Wilson was 17 of 31 for 156 yards and a late interception. Teammate Carlos Dunlap had three sacks.

The Seahawks took the lead on their opening drive of the second half, with DeeJay Dallas scoring on a 4-yard run to make it 10-3.

The Rams responded with a touchdown drive of their own, with Stafford hitting Kupp with a 6-yard scoring strike to tie it at 10-all.

The score was tied 3-3 at halftime after Seattle’s Jason Myers kicked a 39-yard field goal with 10 seconds left.

The Rams held the ball for 21 minutes in the first half and had a 153-79 edge in total offense, but their offense stalled every time they crossed midfield — which they did on their first four drives.

Their only points came on Gay’s 55-yard field goal on their first drive, which was extended by a play after Seattle’s Alton Robinson was flagged for running into Rams punter Johnny Hekker, moving the ball close enough for Gay’s attempt.