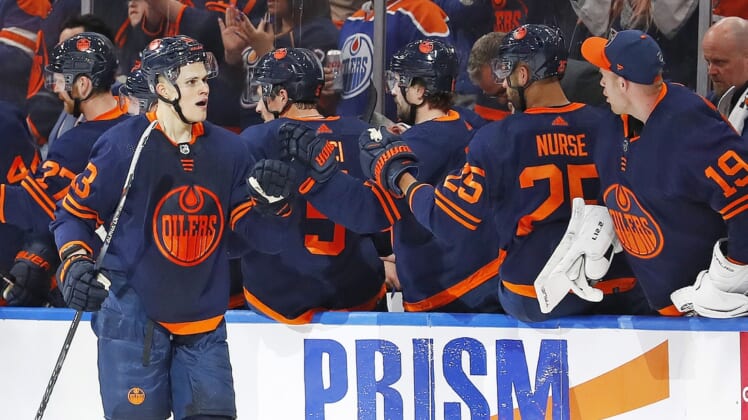 Connor McDavid had a goal and two assists to help the Edmonton Oilers post a 5-2 win against the visiting Dallas Stars on Wednesday.

The output moved McDavid past Florida Panthers forward Jonathan Huberdeau into the NHL scoring lead with 113 points. Huberdeau has 111.

Evander Kane, Derek Ryan, Zach Hyman and Jesse Puljujarvi each added a goal and Evan Bouchard had two assists for the Oilers (45-26-6, 96 points), who moved four points ahead of the Los Angeles Kings in the battle for second place in the Pacific Division.

Jason Robertson and Roope Hintz each had a goal and an assist for the Stars (43-29-5, 91 points), who failed to tighten their hold on a Western Conference wild-card playoff spot. Scott Wedgewood made 45 saves.

Kane opened the scoring at 3:12 of the first period on the Oilers’ first shot on goal. McDavid sped down the right wing and sent a backhand pass while in full stride behind the net to a streaking Kane in front of the net for a 1-0 lead.

Ryan doubled the lead at 6:17 of the first. Ryan McLeod’s shot from the left circle hit the crossbar and bounced to Ryan just below the right circle.

Robertson cut the deficit to 2-1 at 11:39 of the opening period. Hintz took a stretch pass from defenseman John Klingberg and left a drop pass for a trailing Robertson at the top of the left circle. Robertson wired his shot top corner over Smith’s glove. Klingberg collected the 300th assist of his NHL career.

Hintz tied it 2-2 at 5:06 of the second period. Smith thought he had the puck covered in the crease, but Robertson spotted it loose in front of the goalie’s left pad and poked it through the paint to Hintz for the tap-in.

Hyman put the Oilers back in front 3-2 at 12:39 of the second when he swept the rebound of a Leon Draisaitl point shot past Wedgewood’s stick.

Puljujarvi deflected Bouchard’s point shot to push the lead to 4-2 at 18:00 of the second period on Edmonton’s 40th shot on goal.

McDavid scored into an empty net with three seconds remaining.