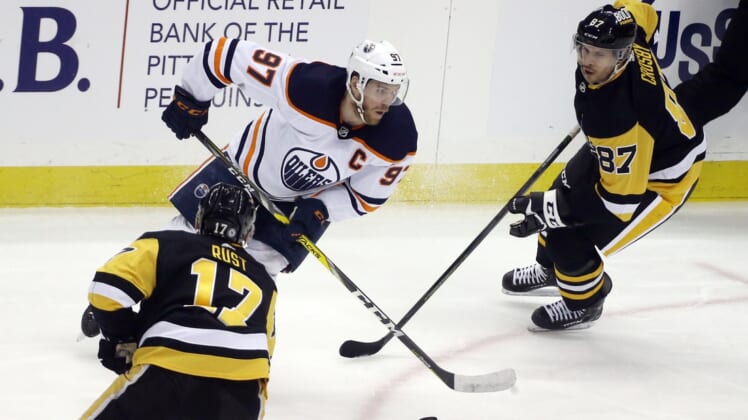 Connor McDavid had a goal and three assists Tuesday as the visiting Edmonton Oilers clinched second place in the Pacific Division with a 5-1 win over the Pittsburgh Penguins.

Evan Bouchard, Evander Kane, Zach Hyman and Zack Kassian also scored for the Oilers, who have won five of their past six.

Jeff Carter scored for the Penguins (45-25-11, 101 points), who have lost two straight and three of five as they scramble to keep from finishing in a wild-card spot. Pittsburgh goaltender Casey DeSmith made 37 saves.

Edmonton played without defenseman Darnell Nurse, who has an unspecified leg injury.

Bouchard, playing in his 100th career game, got the only goal of the first. From the right circle, he made it 1-0 with a screened, rising shot. McDavid set a career high with his 76th assist before finishing the night with 78.

It appeared that Bouchard scored again to double Edmonton’s lead at 1:58 of the second, but Pittsburgh successfully challenged an offside play preceding the shot.

The Penguins tied it at 5:23 of the second. Mike Matheson let loose a shot from the center point. Carter got the short rebound and, from beside the left post, chipped the puck past Smith.

Kane restored the Oilers’ lead 25 seconds later. Off a backhand pass from Kailer Yamamoto, Kane made it 2-1 on a one-timer from the right circle.

On a power play at 4:08 of the third, Hyman upped Edmonton’s lead to 3-1 when he pounced on a rebound in front and swept the puck around DeSmith’s left skate.

McDavid added a power-play goal on a sharp-angle, far-side shot at 9:13 of the third to push it to 4-1, extending his league-leading point total to 122.

The Penguins again successfully challenged an offside play when Derrick Brassard put the puck in an empty net with 2:15 left, but Kassian delivered a good empty-netter with 1:24 remaining.