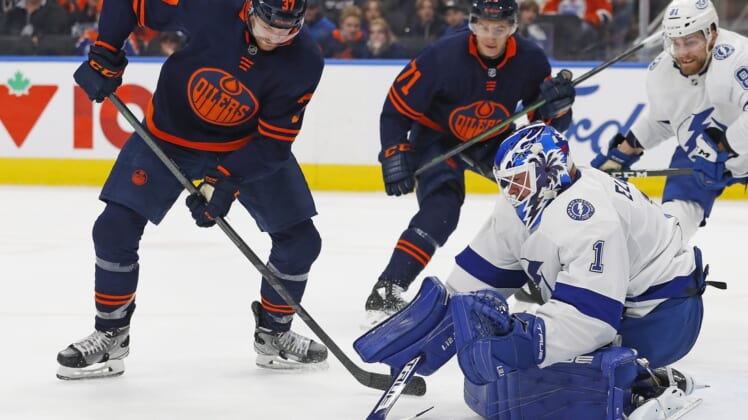 Connor McDavid scored two goals, and Leon Draisaitl and Kailer Yamamoto each had a goal and an assist to lead the host Edmonton Oilers to a 4-1 victory over Tampa Bay Lightning on Saturday night.

Mikko Koskinen made 31 saves and Tyson Barrie added two assists for Edmonton, which moved into a tie for third place in the Pacific Division with the win.

It was the league-leading 30th multi-point game for McDavid, who also moved past Florida’s Jonathan Huberdeau (82) into the NHL scoring lead with 83 points.

Zach Bogosian scored a goal and Brian Elliott stopped 45 of 48 shots for Tampa Bay, which has lost three straight regulation games for the first time this season. The contest marked the Lightning’s first game at Rogers Place since capturing the first of two consecutive Stanley Cups with a win over the Dallas Stars on Sept. 28, 2020.

Edmonton took a 1-0 lead at the 10:01 mark of the first period. McDavid picked up the puck near center ice and blew past defenseman Victor Hedman before cutting in front of the net and tucking a forehand shot inside the right post.

The Oilers hit the post four times in the first two periods while outshooting the Lightning, 33-21.

Edmonton finally extended its lead to 2-0 with 45 seconds left in the secod period. The score came on a power play goal by McDavid who rifled a shot from the middle of the left circle over Elliott’s right shoulder and under the crossbar for his 32nd of the season.

Tampa Bay cut it 2-1 midway through the third period when Bogosian fired a wrist shot from the high slot past Koskinen for his third goal of the season.

The Lightning had an excellent chance to tie it with a 5-on-3 power play for 1:23 but couldn’t convert. Draisaitl then made it 3-1 with a breakaway goal, his 39th of the season.

Tampa Bay pulled Elliott for an extra attacker with 3:15 remaining and Yamamoto sealed the win with an empty-netter with 2:14 to go.