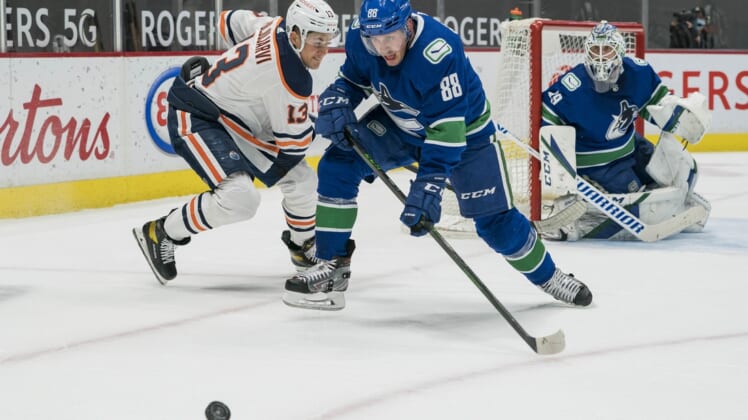 Connor McDavid scored twice and added two assists as the visiting Edmonton Oilers beat the slumping Vancouver Canucks 5-3 on Monday to clinch a berth in the Stanley Cup playoffs.

McDavid, who is running away with the league’s point-scoring race, has collected 31 goals and 91 points. He has six games remaining in the regular season to reach the century mark.

Jesse Puljujarvi had a goal and an assist and Tyson Barrie and Dominik Kahun also scored in the win, and Leon Draisaitl logged two assists.

Goaltender Mikko Koskinen stopped 20 shots for the Oilers (31-17-2, 64 points), who have won four of five games and are eight points behind the first-place Toronto Maple Leafs in the North Division with two games in hand.

J.T. Miller collected a goal and an assist, and Nate Schmidt and Brock Boeser contributed goals for the Canucks (19-24-3, 41 points). Vancouver received a 27-save performance from goalie Braden Holtby in its fifth straight loss.

The Oilers and Canucks meet three more consecutive games as McDavid pursues the 100-point mark in the truncated season. The Edmonton superstar has managed three or more points in six of the past seven games.

McDavid opened the night by setting up Puljujarvi’s goal before the four-minute mark — a tap-in goal set up by a slick pass when everyone figured McDavid would shoot.

Schmidt tied the game with 6:56 remaining in the opening period when his long shot found the mark, but Barrie’s goal 18 seconds into the second period put he Oilers ahead for good. Barrie darted from his point position after McDavid’s shot was stopped.

McDavid reached the 30-goal plateau for the fifth consecutive season when he made it a 3-1 game by firing a shot that Holtby could only get a piece off at the 16:33 mark of the middle frame.

Miller drew the hosts within one 43 seconds later when he found a loose puck in the slot and deposited a nifty backhand. Kahun restored the two-goal edge by completing a three-way passing play with 44.1 seconds left in the second period.

Boeser again put the Canucks within one when he ripped a shot off a won faceoff with 3:27 remaining in regulation, but McDavid iced the game on an empty-net goal with one minute left.