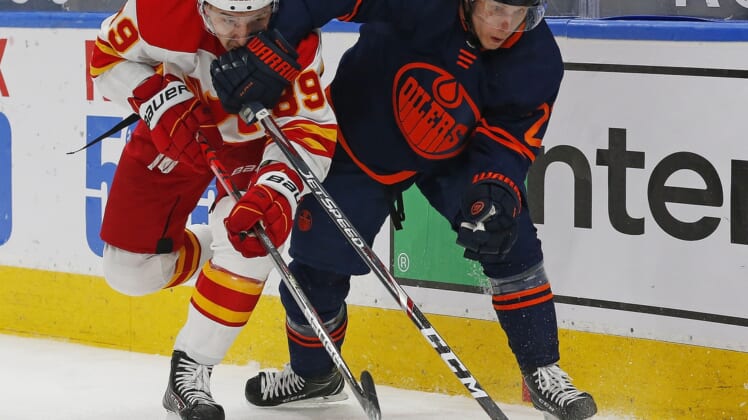 Connor McDavid’s late goal broke a deadlock and capped a three-point game, leading the host Edmonton Oilers to a 3-2 victory over the Calgary Flames on Saturday night.

McDavid, the league’s leading scorer who was held without a point in the previous three games, scored when he drove down the left wing and ripped a shot off the far post with 3:45 remaining in regulation.

Goaltender Mike Smith made 34 saves while Kailer Yamamoto netted one goal and one assist for the Oilers, who snapped a three-game skid with a comeback win.

In their first game after coach Geoff Ward was fired and replaced by Darryl Sutter (although due to protocols, Sutter wasn’t behind the bench and assistant coach Ryan Huska served as bench boss), the Flames came out of the gates with one of their best first-period efforts of the season.

The Flames were up 10-1 in shots in the first seven minutes, 21 in total in the opening period, and took the lead when Johnny Gaudreau snapped a nine-game goal drought. While on the power play, Elias Lindholm sent a cross-ice pass that Gaudreau one-timed from the bottom of the right circle with 5:11 remaining in the opening frame.

The hosts were much better in the second period and were rewarded when Jesse Puljujarvi netted his seventh goal of the season. Tyson Barrie’s point shot hit the post, but Puljujarvi buried the rebound with 2:59 remaining in the frame.

Noah Hanifin snapped a 44-game scoring drought when he restored Calgary’s lead early in the third period. Amidst a shift that saw the Flames win a litany of puck battles, Lindholm spun to whip a pass to Hanifin in the high slot and he found the mark with a long wrist shot 102 seconds into the frame.

However, Yamamoto again pulled the Oilers even. While a pair of defenders came to him on a rush, Leon Draisaitl sent a seeing-eye pass to Yamamoto in the slot and he converted at the 6:07 mark of the period.

Jacob Markstrom, in his first game in two weeks after missing a handful of action due to injury, stopped 30 shots in a strong performance.

On top of being an entertaining game, it was more of an old-school Battle of Alberta on the emotional scale. In the first period alone, there were a couple of fights, the first between Calgary’s Milan Lucic and Edmonton’s top defenseman Darnell Nurse. The second featured Matthew Tkachuk of the Flames against former teammate James Neal.