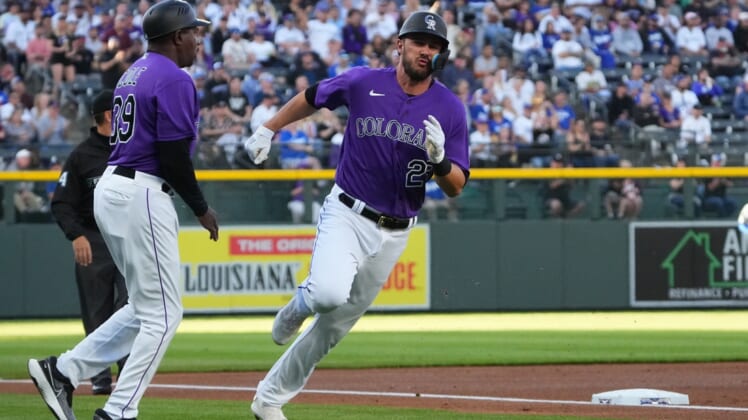 Connor Joe hit a go-ahead home run in the eighth inning, and the Colorado Rockies beat the Los Angeles Dodgers 3-2 in Denver on Saturday night.

Joe had two hits and two RBIs, and Ryan McMahon added two hits for Colorado. Carlos Estevez (1-0) got the win after retiring the only batter he faced.

Rockies closer Daniel Bard struck out the side in the ninth to pick up the save.

Austin Barnes had two hits, including a home run, for the Dodgers, who beat the Rockies 5-3 on Friday in both teams’ season opener. Blake Treinen (0-1) took the loss after allowing Joe’s homer.

Colorado starter German Marquez limited the Dodgers to one run on three hits and no walks in seven innings. He struck out five.

Los Angeles starter Tony Gonsolin allowed a run on five hits and a walk while fanning three in three innings.

The game was tied at 2-2 in the bottom of the eighth when Joe came through with his first long ball of the season. Treinen got struck out the first batters of the inning before Joe went deep to center on a 1-2 cutter.

Colorado struck first, in the first inning. Kris Bryant and Brendan Rodgers singled with one out, and McMahon made it 1-0 with a two-out single to right.

Marquez cruised through the first two innings before Los Angeles got to him in the third. With one out, Barnes homered to deep left field on a full count to tie the game at 1-1. It was his first home run of the season.

Los Angeles reliever Tyler Anderson came on in the fourth and worked two scoreless innings before the Rockies rallied against him in the sixth. C.J. Cron led off with a single, moved to second on a groundout and reached third on a wild pitch. Joe then singled to left to drive in Cron.

The Dodgers tied the score again in the top of the eighth off Alex Colome. Gavin Lux and Barnes singled with one out to put runners on the corners, and Lux scored on a single by Mookie Betts. Los Angeles loaded the bases with two outs but Estevez relieved Colome and got Max Muncy to fly out to end the threat.