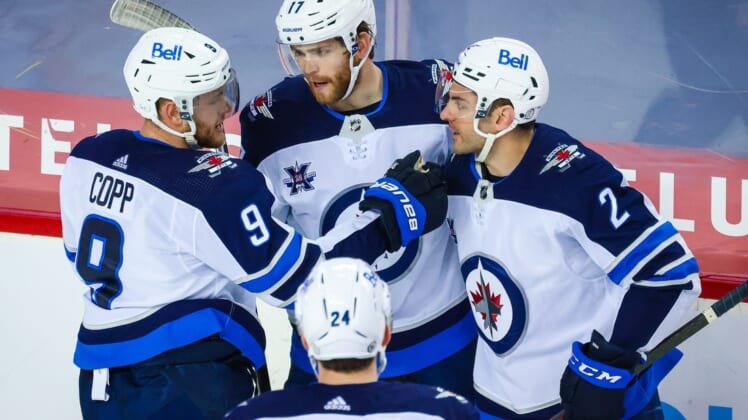 Adam Lowry and Blake Wheeler both scored twice and goaltender Connor Hellebuyck collected the shutout as the Winnipeg Jets clinched a playoff spot with a 4-0 victory over the Calgary Flames on Wednesday to snap a seven-game losing skid.

Hellebuyck made 32 saves, 17 in the third period, for his third shutout of the season and 23rd of his career for the Jets (28-21-3, 59 points), who moved two points ahead of the Montreal Canadiens for the third spot in the North Division. Both the Jets and Canadiens have four games remaining in the regular season.

Winnipeg coach Paul Maurice won for the 300th time with the Jets, becoming only the third coach in NHL history to have 300 or more wins with two different franchises. He also reached that milestone with the Hartford Whalers/Carolina Hurricanes.

The Jets won six of nine games against the Flames this season.

Jacob Markstrom stopped 15 shots, including Andrew Copp’s penalty shot in the final minutes, for the Flames (22-26-3, 47 points), who have lost three of four games and could be eliminated from playoff contention on Thursday if the Canadiens earn a point against the Toronto Maple Leafs.

Lowry, who spent many years living in Calgary while his father, Dave, was a Flames assistant coach and bench boss of the Western Hockey League’s Hitmen, opened the scoring 69 seconds into the game he elected to shoot on a two-on-one rush and buried a glove-side shot.

He doubled the lead with a shorthanded tally early in the second period. After being sprung on a breakaway by Dylan DeMelo, Lowry tucked a shot through Markstrom’s legs for his 10th goal of the season.

Then Wheeler marched to a milestone. The Jets captain made it a three-goal edge with 74 seconds remaining in the second period by converting another breakaway opportunity.

Wheeler’s second of the night, and 13th of the season, came on an early third-period power play. He was at the doorstep when he got the puck from Mark Scheifele and slipped home a deke for his 800th career point. Scheifele’s assist was his 500th point.

The goals have Wheeler riding a five-game point streak in which he has netted three goals and three assists.

From there, the Jets worked to preserve the shutout. Calgary’s best chance came during a four-minute power play midway through the third period, but couldn’t convert.