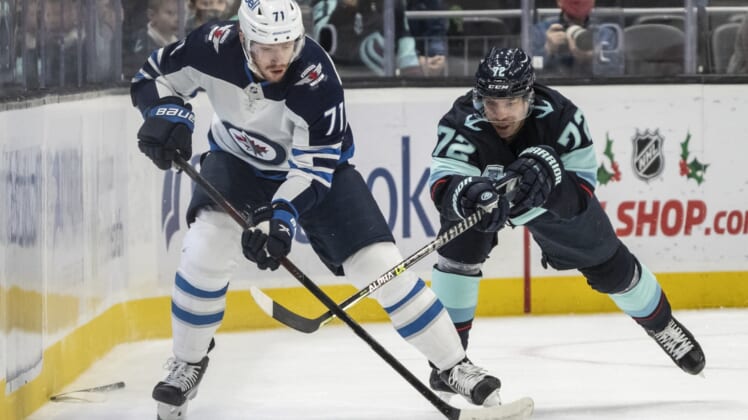 Kyle Connor scored twice, and Connor Hellebuyck made 25 saves for his first shutout of the season and the 25th of his career as the Winnipeg Jets defeated the host Seattle Kraken 3-0 Thursday night.

Dominic Toninato also scored for the Jets, who won for the third time in their past four games. Connor’s two goals gave him 17 for the season, tied for third in the National Hockey League behind Edmonton’s Leon Draisaitl (23) and Washington’s Alex Ovechkin (20).

Seattle goaltender Philipp Grubauer stopped 28 of 31 shots. The expansion Kraken lost their second in a row following a 5-1-1 stretch.

The Kraken had some offensive opportunities but went 0-for-5 on the power play. They have lost the first two games of their three-game homestand by a combined 9-1 margin after a loss Monday against Pittsburgh. They will play host to Columbus on Saturday.

The Jets opened the scoring at 5:24 of the first period. Paul Statsny pried the puck away from two Seattle defensemen behind the net and fed Toninato in the high slot. His one-timer beat Grubauer to the glove side.

It remained 1-0 until the third, when Connor tallied his team-leading 16th goal just 47 seconds into the period.

Logan Stanley corralled a loose puck in the neutral zone and fed Connor, who carried the puck over the blue line along the left-wing boards. Connor dropped a pass for Mark Scheifele and skated to open ice in the high slot, taking a return pass and firing a wrist shot past Grubauer.

Connor made it 3-0 at 14:54 of the third, taking a pass from Scheifele at the blue line and splitting two defenders before lifting a wrister from close range into the upper netting.

Winnipeg was without defenseman Neal Pionk, who was serving the second and final game of his suspension for kneeing Toronto’s Rasmus Sandin on Sunday.

The Jets will conclude their two-game trip Friday night in Vancouver.