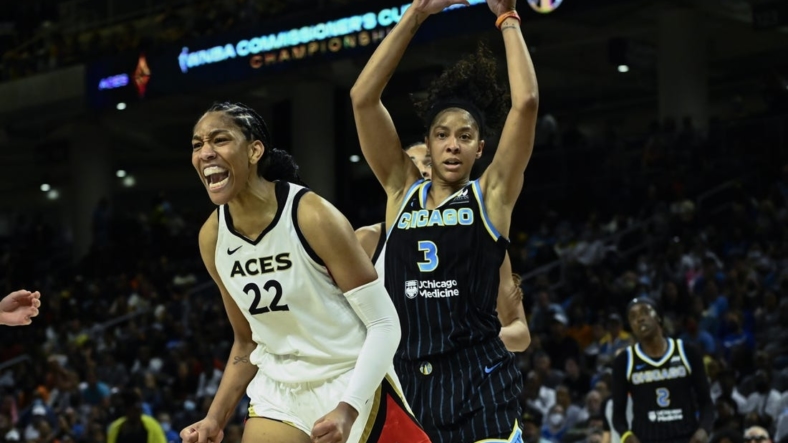 The Las Vegas Aces hold a 1-0 lead in the WNBA Finals as they host the Connecticut Sun in Game 2 on Tuesday night.

The top-seeded Aces were happy with their 67-64 victory in Game 1 on Sunday, but not satisfied with how they started the best-of-five series.

The Sun say they remain confident that they can level the series by repeating their performance — in which they held the high-powered Las Vegas offense to a season low in scoring — needing just a couple of key plays in the second half to flip the outcome.

“We have to have a lot of confidence,” said Alyssa Thomas, who led the Sun with 19 points, 11 rebounds and five assists. “This is a three-point game, and we had a chance to tie.

“There are some things we can clean up. Of course, we can make more shots, but overall we played a hard game.”

Sunday’s outcome was in doubt until Connecticut forward DeWanna Bonner missed what would have been a game-tying 3-pointer with 2.5 seconds remaining.

Hammon upbraided her team with an intense halftime speech after they fell behind 38-34.

“Points in the paint, rebounding, hustle points, transition points, second-chance points,” Hammon said, “we didn’t do any of them — until the second half.”

After taking a 25-17 lead after the first quarter, the Aces went cold as Connecticut raced through a 21-9 dominant second quarter for a four-point halftime lead.

After halftime, Las Vegas outscored Connecticut the rest of the way, 33-26.

The biggest edge for Las Vegas came at the foul line, where the Aces outscored the Sun 16-3. Las Vegas made 16 of 19 free throws; Connecticut made three of five.

The Aces, who averaged 80.6 points in the regular season, got 24 points, 11 rebounds, four blocks and two steals from A’ja Wilson, who received her second WNBA MVP award before the game.

Game 3 is Thursday in Uncasville, Conn.