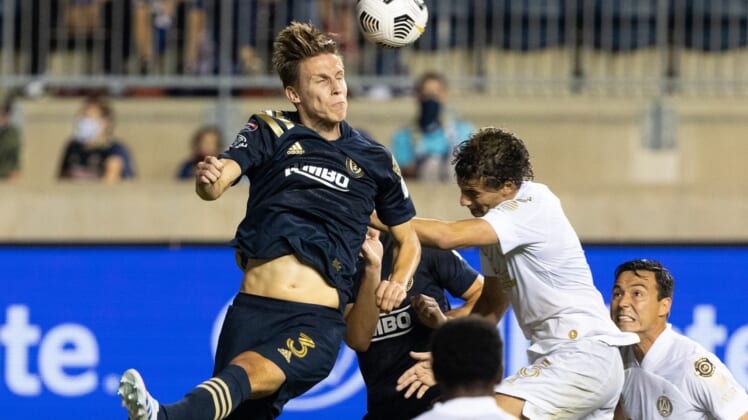 The Philadelphia Union cruised into the CONCACAF Champions League semifinals, completing a 4-1 aggregate victory over Atlanta United with a 1-1 draw in the second leg Tuesday at Atlanta.

The Union will oppose either the Portland Timbers or Mexico’s Club America in the two-leg semifinals, which will be played in mid-August and mid-September. The Timbers-America series is tied 1-1 heading to the second leg at Mexico City on Wednesday.

Atlanta United attempted to get back into its match Tuesday by scoring the opening goal. Santiago Sosa took a pass just outside the 18-yard box, turned past a defender and fired a low, hard shot inside the far post in first-half stoppage time.

The Union got an insurance goal in the 88th minute when a botched clearance attempt by Atlanta left the ball for Kacper Przybylko, facing a nearly vacated net. He fired in a 10-yard shot to level the evening’s score.

Brayan Angulo scored from long range in the first half, and the Mexican side defeated the Canadian club in Mexico City to complete a 4-1 aggregate victory.

In 27th minute, Cruz Azul goalie Jose Corona sent a long kick from his own penalty area past the midfield line. The ball was flicked by a Toronto player and fell to Angulo, who with his first touch fired a right-footed shot from 40 yards out. The ball flew over the head of Toronto goalie Alex Bono and into the net.

Cruz Azul moves on to oppose either Monterrey or the Columbus Crew. Monterrey heads home to Guadalupe, Mexico, on Wednesday after a 2-2 tie in Ohio last week.