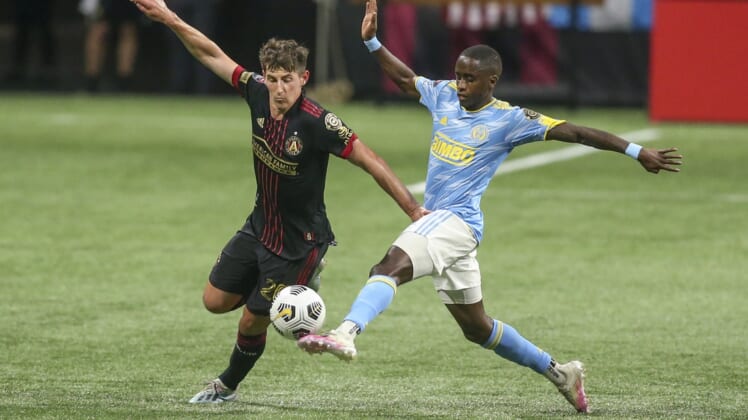 Kacper Przybylko scored two second-half goals and assisted on another as the Philadelphia Union pulled away for a 3-0 win over host Atlanta United in the first leg of a CONCACAF Champions League quarterfinal series.

The final leg of the total-goals series will be played May 4 in Chester, Pa.

Przybylko tapped in the first goal off a corner kick in the 57th minute, and he doubled the lead with a 16-yard shot off a two-on-one breakaway in the 73rd minute.

Anthony Fontana capped the Union’s big night when he rolled the ball into an empty-net off a two-on-none breakaway with Przybylko.

The Philadelphia-Atlanta winner advances to a semifinal matchup against the Portland Timbers or Club America, who begin their quarterfinal series Wednesday in Oregon.

Brayan Angulo gave Cruz Azul the lead twice in the first half, and the Mexican side powered to a victory in the first leg of a quarterfinal series at Tampa.

The second leg is scheduled for May 4 in Mexico City.

A curling 18-yard effort from Angulo in the third minute opened the scoring, but Toronto’s Jonathan Osorio leveled the score in the 20th minute after a scramble in the 6-yard box.

Angulo put Cruz Azul on top for good in the 34th minute with a tap-in off a corner kick. Pablo Aguilar’s header off a free kick in the 58th minute sealed the first-leg outcome.

The Cruz Azul-Toronto winner will move on to meet either Mexico’s Monterrey or the Columbus Crew, who open their quarterfinal series Wednesday in Ohio.