Committee Vote Could Yield Fireworks at Next Stadium Meeting 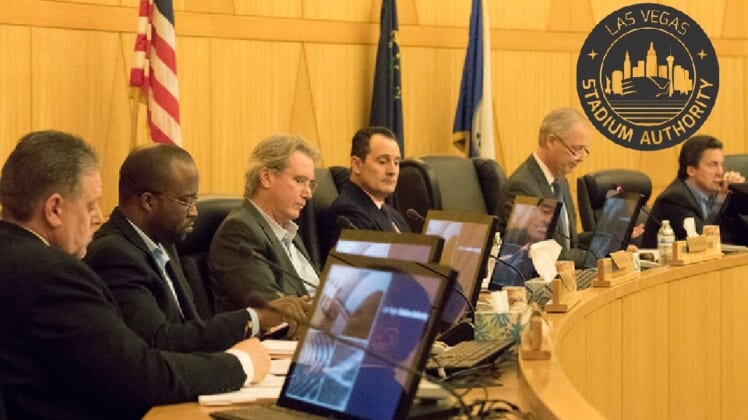 Board Member Ken Evans wants to be the Chairman of the Oversight Committee despite possible conflict of interests.

The Las Vegas Stadium Authority will once again convene with a full agenda including the approval of the joint-use agreement with UNLV. But it’s the appointment of a Chairperson to the organization’s Community Benefits Oversight Committee that could result in heated debate on Thursday.

As the Las Vegas Stadium Authority continues to keep the stadium project on its tight timeline, the body’s next meeting looks to be another full agenda including discussion of the stadium financing trust agreement, review and discussion of the Personal Seat License Purchase and Sale Agreement (PSLs), and a review of the Stadium Project Development agreement.

While it’s shaping up to be a full and long meeting, the naming of a chairperson for the soon-to-be established Community Benefits Oversight Committee could provide the most drama and intrigue.

The new seven-member committee is charged with implementing and watching over the spirit of the Raiders Community Benefit plan which includes the promise to hire minority, women-owned, and LGBT contractors and other businesses in the construction of the stadium and after. The plan, which is perhaps the most aggressive and progressive plan ever put forward by an NFL franchise, was the most contentious issue the Authority has had to face. Although the Raiders, their building partners, and a majority of the Board were supportive from the get-go, several fringe community activist groups opposed it saying it didn’t go far enough.

In the end, the plan was approved and the next step is to insure an oversight committee is established to report back to the Authority on progress, goals, and implementation of the plan.

According to our sources, there could be a battle brewing over the selection of the chairperson.

The committee’s seven members include three selected by the Raiders, one from Senate Majority Leader Aaron Ford, State Assembly Leader Jason Frierson, Governor Brian Sandoval, and one member nominated and voted on by the Stadium Authority Board. The member elected by the Authority will most likely serve as the committee’s chairperson.

General nominations to fill the one seat appointed by the Stadium Authority were made by nine local diversity chambers.

Here’s a look at the selections we know are locks and a look at the limited field for the chairperson role, which will be voted on Thursday.

Although Stewart seems the favorite for the Chairman role, sources tell us he’s under pressure to step aside because he is not a minority.

Stewart is the only person that has been brought forward during the past Authority meeting for a vote for the role of Chairman. His nomination earned support immediately from Board members Tito Tiberti, Jan Jones-Blackhurst and Tommy White, who introduced his nomination as a motion during the last meeting. Jones-Blackhurst lauded Stewart’s experience with both minority contractors and that he was also an attorney which would help with oversight in the area of contract, labor, and other key issues.

Stewart is seen by observers as almost a lock for the role due to his background and experience working with the multitude of contractors and minority groups who will benefit from the Community Benefits plan.

Late in the drafting of this story, sources tell the Las Vegas Raiders Report Stewart has come under pressure from some to remove himself from contention primarily due to the fact he is not a minority himself. We reached out to Mr. Stewart but he was unavailable for comment.

Despite this, since he is the only person who has been officially nominated on the floor for the role, and perhaps the most qualified of all the names we have seen, Stewart seems to be the choice with the most support  – barring any last minute change of heart or increased pressure for him to step aside.

Stewart was nominated by the Nevada Contractors Association, Latin Chamber of Commerce, and by Board Member Tommy White.

The Latin Chamber’s Peter Guzman would be a natural and well-received Chairman, if nominated.

So far, of the selections we’ve seen from State of Nevada officials, and those names floated thus far, Guzman sparks the most interest. The energetic and experienced local businessman has been an active participant in almost every phase of the stadium project and his connections in the Hispanic community are unparalleled. A real estate broker by trade, Guzman has earned a reputation as a well-connected and relentless champion of small business in Southern Nevada. His organization continues to grow and build influence amongst Latino-owned businesses and he participated heavily in discussion that led to the Community Benefits Plan.

When looking at the members of the committee appointed so far, one omission is glaring: a Latino committee member.

Nominating Guzman, and electing him, would remove this major omission of a major part of the community. Based on those appointed by state officials, and from what sources tell us on the Raiders possible selections, the Committee will consists of four women, one member of the LGBT community, three African-Americans and one non-minority. Guzman’s election would help the Latino community have an important leader to represent its interest. It’s estimated over 60% of construction jobs in Southern Nevada are filled with Hispanic labor.

Guzman has been nominated to sit as a member of the Committee by The Asian Chamber of Commerce.

Authority Board member Ken Evans wants to be the Chairman of the Community Benefits Plan Oversight Committee.

Evans, who also sits on the main Stadium Authority Board, expressed his interest in the role during the last Board meeting. Evans, who is a retired Air Force lieutenant colonel, small business owner and 25-year resident of Las Vegas, was also involved in the stadium project and testified during the special session around Senate Bill 1. Evans has been a clear and strong voice on the Board for the African-American community, to be certain.

Still, there is a great amount of opposition to his taking the role of Chairman of the Oversight Committee. That is primarily because of the appearance of a conflicts of interest for Evans on several fronts.

First, he is a member of the Stadium Authority Board. To have a chairperson reporting back to himself and the rest of the Board, seems off. Not only that, how would he maintain impartiality when voting on matters brought forward in front of the Board from the Committee?

Second, since many of the minority owned contractors and other businesses who will be working with the committee to obtain contracts to work on the stadium are also members of the Urban Chamber he runs, how could impartiality be maintained? In fact, when Evans testified in front of the Senate to support SB1 to fund the stadium project, he said it was a big business development opportunity for his members.

“For the Urban Chamber of Commerce this represents business and procurement opportunities,” Evans said in October of 2016. “The reason why we are supporting it is because it represents economic development and procurement for our businesses.”

Evans is an important voice on the Stadium Authority Board and he’s expected to be that moving forward. Although he has some support to be the Chairman and sit on the committee, in a time when Americans and Nevadans are frustrated with even the appearance of a conflict of interest in its public leaders and institutions, if he were elected it could tarnish future work and progress by the Committee, the Board and ultimately Evans.

Evans was nominated by fellow Board members Bill Hornbuckle and the Chairman Steve Hill. His name was not put forward for nomination by any of the nine diversity chambers.

The Las Vegas Raiders Report will again cover the meeting and join with on Facebook Live after to give you a summary of the outcome of this story and other items on the agenda. Make sure to follow us on Twitter @LVRaidersReport and “Like” our Facebook page to get notifications of when we’re live after the meeting.