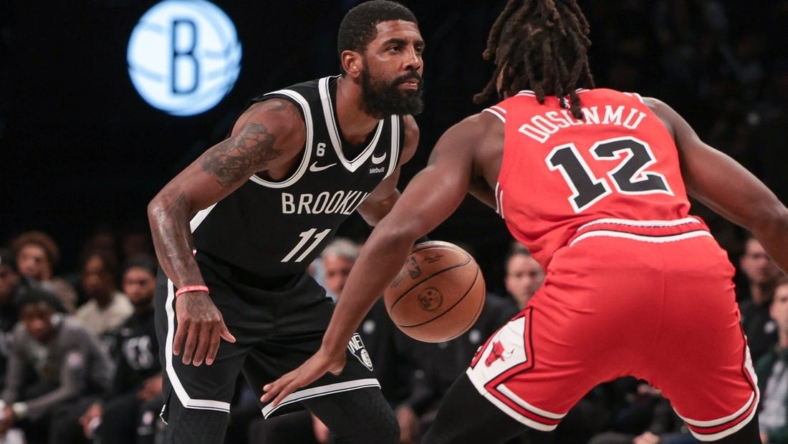 Silver’s statement came one day after Irving and the Nets released a joint statement that pledged to donate $1 million to combat “hate and intolerance.” That came as response to the guard’s support of a movie that promoted antisemitic tropes.

Silver also said he was “disappointed” that Irving did not apologize for his decision.

“Kyrie Irving made a reckless decision to post a link to a film containing deeply offensive antisemitic material,” Silver said in his statement. “While we appreciate the fact that he agreed to work with the Brooklyn Nets and the Anti-Defamation League to combat antisemitism and other forms of discrimination, I am disappointed that he has not offered an unqualified apology and more specifically denounced the vile and harmful content contained in the film he chose to publicize. I will be meeting with Kyrie in person in the next week to discuss this situation.”

Although he did not apologize, Irving said in a statement he “meant no harm” for linking to the movie “Hebrews to Negroes: Wake Up Black America.”

Irving has embroiled the Nets’ organization in controversy since his support of the movie first surfaced.

“I oppose all forms of hatred and oppression and stand strong with communities that are marginalized and impacted every day,” Irving said in Wednesday’s statement. “I am aware of the negative impact of my post towards the Jewish community and I take responsibility. I do not believe everything said in the documentary was true or reflects my morals and principles.

“I am a human being learning from all walks of life and I intend to do so with an open mind and a willingness to listen. So from my family and I, we meant no harm to any one group, race or religion of people, and wish to only be a beacon of truth and light.”

According to the statement, Irving and the Nets will work with the Anti-Defamation League to fight “antisemitism and all types of hate that undermine justice and fair treatment for every individual.”

“There is no room for antisemitism, racism, false narratives or misguided attempts to create animosity and hate,” said Sam Zussman, CEO of BSE Global, parent company of the Brooklyn Nets and Barclays Center. “Now, more than ever, there is a pressing need to ensure education in these areas. We are putting our prior statements into practice because actions speak louder than words.”

“Hebrews to Negroes: Wake Up Black America” traces the theory that Jews claimed the religion and identity of the original Israelites, which prompted the enslavement of Africans then brought to America.