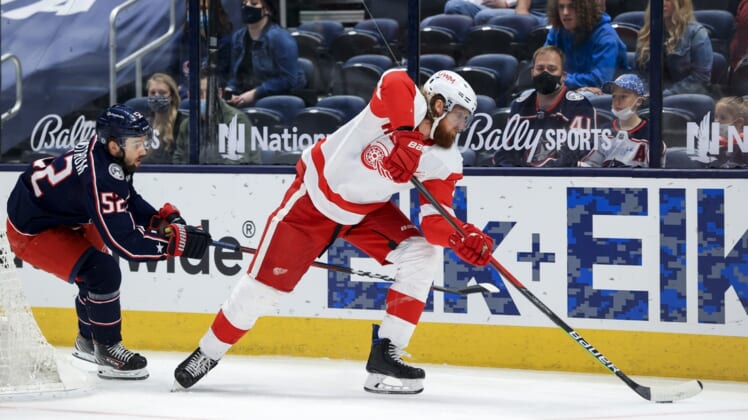 Max Domi scored with 20 seconds remaining in overtime and the Columbus Blue Jackets won their season finale over the visiting Detroit Red Wings 5-4 on Saturday.

The two teams at the bottom of the Central Division wound up tied in points, though Detroit (19-27-10, 48 points) technically finished ahead of Columbus (18-26-12, 48 points) by virtue of having more wins.

Domi scored from the slot off a feed from Oliver Bjorkstrand. Cam Atkinson, Bjorkstrand, Eric Robinson and Jack Roslovic scored in regulation for Columbus.

The game was tied 1-all after the first period.

Vrana fired in his 19th goal of the season at 6:40 when he tipped Dennis Cholowski’s blast from the point past Matiss Kivlenieks.

Atkinson scored his 15th goal at 10:16 after the Blue Jackets won a faceoff in their zone. Seth Jones advanced the puck into the Detroit zone and passed it to Patrik Laine, who slid it to the uncovered Atkinson in front of the net.

Each side also notched a goal in the second period.

DeKeyser scored for the second straight game when he ripped a shot from the left circle that snuck inside Kivlenieks’ left arm.

Columbus tied it up at 13:15. Bjorkstrand lifted a shot from the right side over Calvin Pickard’s right shoulder for his 18th goal this season.

Neither side had a power play until Domi was whistled for roughing at 6:05 of the third period. It initially wound up favoring Columbus, as it scored the go-ahead goal after a Detroit turnover in the Blue Jackets’ zone. Robinson ripped a shot from the left circle past Pickard at 6:43.

The Red Wings knotted the score just before the power play expired as Gagner tipped in a Filip Hronek shot.

Detroit tied it at 4-all with 3:42 remaining when Filppula tapped in a rebound of a Cholowski shot.