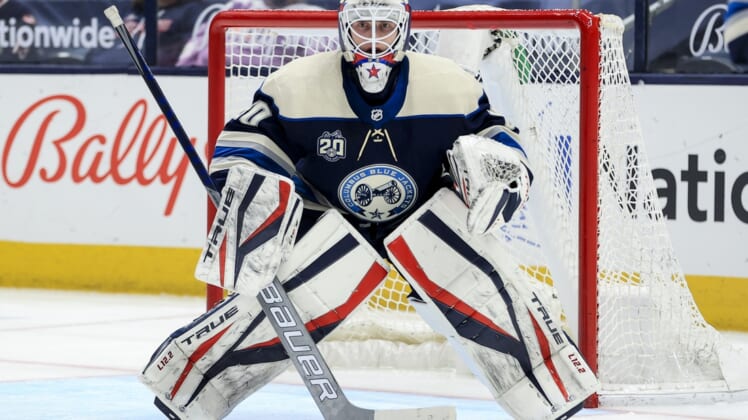 Columbus Blue Jackets goaltender Matiss Kivlenieks died Sunday in what the team called a “tragic accident.” He was 24.

The Blue Jackets said he died from a head injury sustained in a fall but offered no additional details.

“We are shocked and saddened by the loss of Matiss Kivlenieks, and we extend our deepest sympathies to his mother, Astrida, his family and friends during this devastating time,” John Davidson, president of hockey operations, said in a team statement. “Kivi was an outstanding young man who greeted every day and everyone with a smile and the impact he had during his four years with our organization will not be forgotten.”

The Detroit News said Kivlenieks was attending a Fourth of July party at a home in Novi. Mich., and that following a “fireworks incident,” he slipped while getting out of a hot tub and hit his head on concrete. He was taken to Ascension Providence Hospital in Novi, where he was pronounced dead. An autopsy is expected to be performed Monday.

An undrafted free agent from Riga, Latvia, Kivlenieks signed with the Blue Jackets in May 2017 and spent most of his time with the Cleveland Monsters of the American Hockey League. With the Blue Jackets, he played in two games in 2020-21 and six (four starts) in the prior season and had a career record of 2-2-2 with a 3.09 goals-against average and .899 save percentage. He made his NHL debut on the road against the New York Rangers on Jan. 19, 2020, getting the win in the 2-1 game after saving 31 of 32 shots.

He played for Team Lavia in the 2021 IIHF World Championships this spring and was 1-2 with a 2.18 GAA, .922 save percentage and one shutout in four games.

“One thing I loved and appreciated about him was he had a great smile and always was in a good mood,” Blue Jackets captain Nick Foligno told ESPN. “I know it’s cliche, but that’s exactly the kind of guy he was. Just enjoying his life as a 24-year-old living out his dream and you could tell he didn’t take one day for granted, which makes this tragedy even more hard to bear, Praying for his family and all of us who knew him. Hard day for a lot of people in that organization.”