Sportsnaut
Fans in the Nordecke celebrate a goal in a game early last year, before COVID-19 emptied the stadium. Members of the independent supporters group said they were disappointed that they were not asked to be more involved in deciding the team’s new name and logo. Sp Crew 030220 Ac 18

The team, known at the start of the season as Columbus Crew SC, changed its name to Columbus SC on May 10. On Monday, however, the club announced that the club will now be known as the Columbus Crew, without “SC” at the end.

The team issued a joint statement along with the supporters group known as the Nordecke, which had been highly critical of the move away from the Crew nickname and the fact that the decision was made without consulting the fans.

The club tweeted, “This evening, a positive, collaborative discussion took place between Crew investor-operators, front office executives and a diverse group from the Crew community regarding the future of the Club’s brand and the Club’s commitment to its supporter community. 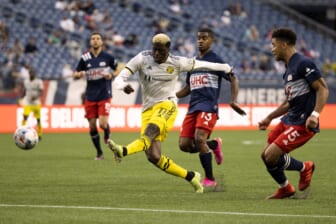 “The importance of keeping the Crew as the Club’s primary identifier was clear. The decision that came from the discussion was that Columbus Crew will remain the team’s official name moving forward.

“The Crew received Nordecke’s support of the name, which will include Columbus Crew as a part of the new crest. In addition, “96” will be placed inside the outline of the Ohio state flag, recognizing the club’s status as the founding member in Major League Soccer.

“The Crew and the Nordecke are excited to move forward together.”

The fans’ passion about the Crew nickname stems in part from the fact that the club has been called the Crew since it was one of the original MLS franchises in 1996.

More recently, “Save the Crew” became the rallying cry as locals in Ohio’s capital worked to prevent then-owner Anthony Precourt from moving the team to Austin, Texas. On Jan. 1, 2019, Jimmy and Dee Haslam, owners of the Cleveland Browns, purchased the Crew and announced their intention of keeping the team in Columbus.

The Crew won the MLS Cup for the second time in their history last year. They also won the title in 2008.