Colts turn to Sam Ehlinger at QB against Commanders 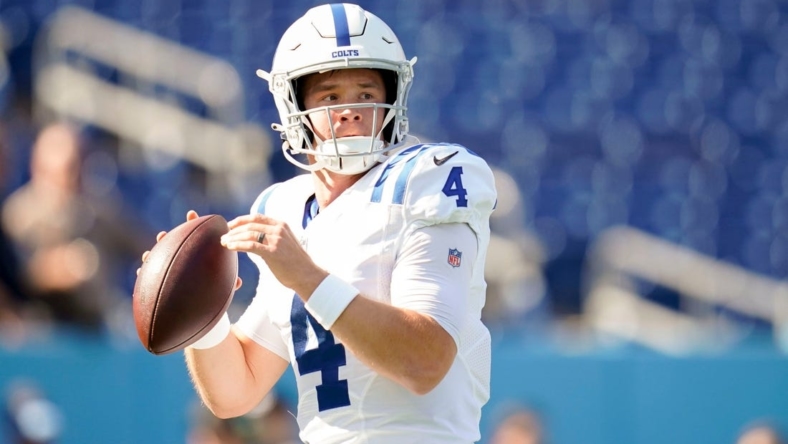 It was supposed to be a referendum game: the quarterback the Indianapolis Colts wanted versus the one they discarded.

But instead of a matchup between Matt Ryan and Carson Wentz on Sunday, it will be Sam Ehlinger of Indianapolis (3-3-1) against Tyler Heinicke of visiting Washington (3-4).

Ehlinger, who is in his second season in the league and has yet to throw a pass in a regular season game, was named the starter after Indianapolis lost for the second time in four weeks to Tennessee, 19-10.

Ehlinger takes over for Ryan, who the Colts acquired in an offseason trade with the Falcons but lasted only seven starts. Ryan ranks fourth in the NFL with 2,008 passing yards but his 84.7 quarterback rating is the second lowest of his 15 seasons.

Ryan suffered a separated shoulder against the Titans, but the Colts were prepared to make the move regardless. Not only did Indianapolis declare Ehlinger the starter, coach Frank Reich said he would remain under center for the rest of the season.

“I’ve been particularly impressed with Sam this year in practice, once the season has started. The look he’s given on the scout team, the quality of his throws, the way he’s commanding himself,” Reich said. “Just feel like at this point that’s the best decision for our team going forward.”

Ehlinger sparked in the preseason, completing 24 of 29 passes for 290 yards, with four touchdowns and no interceptions.

Heinicke took over as the starter for Washington last week, replacing Wentz, who broke the ring finger on his throwing hand and is out for at least a month. Heinicke threw two touchdown passes in the Commanders’ 23-21 win over Green Bay.

In contrast to Wentz, who was sacked 23 times in six starts, Heinicke showed mobility and a knack for improvising and making plays outside the pocket.

The Colts hope to get the same from Ehlinger after seeing the 37-year-old Ryan get sacked 24 times this year and commit 12 turnovers. In the preseason, Ehlinger flashed his nimble feet with a 45-yard touchdown run.

The Washington defense has risen during its two-game winning streak, which included a 12-7 win over the Bears. Last week against the Packers, the Commanders held Aaron Rodgers without a third-down conversion for the first time in his career.

The Commanders hoped for a return this week of defensive end Chase Young, but the former No. 2 overall draft pick will have to wait at least another week to return from surgery to repair a torn ACL.

“He’s close. He’s scheduled to meet with the doctors and until he’s cleared, we’re just rooting for him,” said defensive coordinator Jack Del Rio, who ran practice on Wednesday in the absence of head coach Ron Rivera, who visited his ailing mother in California.

Tackle Sam Cosmi, who missed the last three games after having thumb surgery, was a full participant.

In addition to Ryan, Colts who did not practice on Wednesday were linebacker Grant Stuard (pectoral) and defensive end Kwity Paye (ankle). Linebacker JoJo Domann (abdomen) and center Ryan Kelly (knee) were limited.