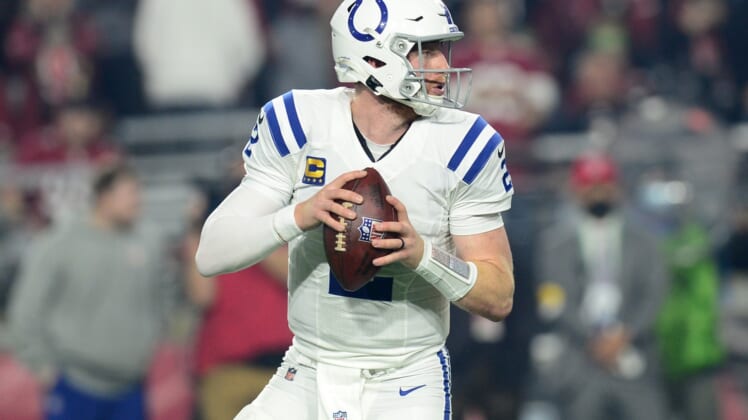 Indianapolis Colts quarterback Carson Wentz was placed on the reserve/COVID-19 list on Tuesday.

Wentz, who said he is unvaccinated, will have to sit out for the Colts (9-6) on Sunday against the visiting Las Vegas Raiders (8-7). He would be required to miss the next 10 days if he tested positive for the virus, or a minimum of five if he’s deemed only a close contact.

“We have placed QB Carson Wentz on the Reserve/COVID-19 list,” the Colts confirmed in a noontime statement, without offering further details of the move.

Sam Ehlinger is in line for the starting nod on Sunday if Wentz is unable to play. Ehlinger, 23, has yet to throw a pass in three games this season since being selected by Indianapolis in the sixth round of the 2021 NFL Draft.

“You’ve always got a plan, just like any other position,” Colts offensive coordinator Marcus Brady said Tuesday. “We have that separate call sheet ready to go. … (Sam is) ready to go.”

Brady said Ehlinger doesn’t have Wentz’s arm strength and might “run around a little bit more” because of his scrambling ability.

The Colts, who have won three in a row, reside one game behind the Tennessee Titans (10-5) for first place in the AFC South. The Titans, however, have swept the season series.

Indianapolis sits in fifth place in the AFC, albeit tied with three other teams at 9-6.

Wentz has thrown for 20,041 yards with 138 touchdowns and 56 picks in 83 career games with the Philadelphia Eagles and Colts. He was selected by the Eagles with the second overall pick of the 2016 NFL Draft.