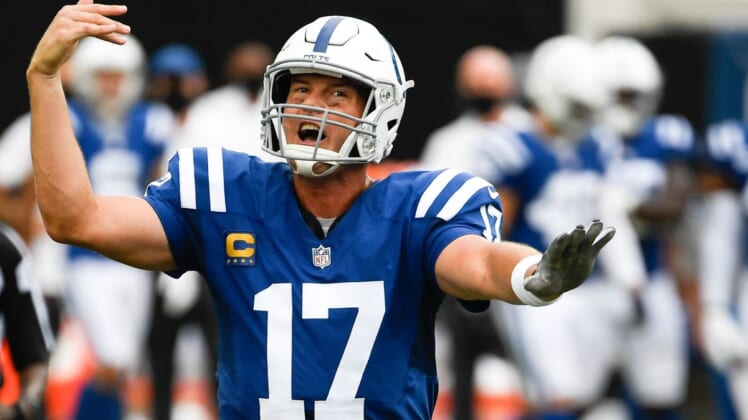 The Raiders face one of their biggest tests of the season so far against a tough Indianapolis Colts team which features a devastating pass rush.

The Raiders have done all they needed to give themselves a chance at the playoffs, and now it’s time to finish the job. In their way this week stands the 8-4 Indianapolis Colts, led by a defense that has proved that they belong among the top in the league. The Raiders have been sputtering as of late, losing 43-6 in Atlanta two weeks ago before beating the winless New York Jets on a last-second bomb this past Sunday.

The Colts, Raiders, Miami Dolphins, and Baltimore Ravens are all fighting for the last two wild card spots in the AFC and the Raiders cannot afford to drop many more games this year. With games against the Colts and Dolphins left on the schedule, winning those would go a long way to helping accomplish their goal of reaching the playoffs for the first time since 2016.

The Colts aren’t the winless Jets and if the Raiders play like they did last week they’re going to lose this game. The potential return of Josh Jacobs, Johnathan Abram, and Trent Brown will have Jon Gruden excited but still, the Colts offer some unique challenges.

The Raiders will need to be better if they want to win this crucial game against a fellow AFC foe and that starts with being able to move the ball against what has been a stout defense. So far this season the unit has ranked fifth in points allowed per drive, only conceding 1.83 points per drive, compared to the Raiders defensive unit which is ranked 31st with 2.85 points per drive.

Linebacker Darius Leonard and cornerback Kenny Moore II have helped the Colts averaged 1.6 takeaways per game, seventh-best in the NFL. On top of those ballhawks, they have one of the more ferocious pass rushes in the league paced by Justin Houston, a player who should be familiar to the Raiders as he spent many years with the Kansas City Chiefs.

The Raider’s offensive line has struggled recently, allowing seven sacks over the last two games, and they will need to get back to their early season form if they want to contain the Colts pass rush. Right tackle Trent Brown returned to practice Wednesday after missing the last five weeks with a variety of complications surrounding the coronavirus and his presence should help the offensive line deal with the Colts pass rushers.

“Trent is the best in the world at what he does,” said Carr after practice Wednesday and it’s clear that the quarterback is excited at the potential return of the big mauler.

Slowing Down the Indianapolis Offensive Line

Left guard Quentin Nelson may be one of the best players in the NFL and he is the key cog in this Indianapolis Colts offensive line that is one of the best in the league. The Colts have only allowed 1.2 sacks per game and this bodes poorly for a Raiders defense that has struggled to sustain pressure for extended stretches this season.

Raiders fans got their first look at new linebacker / defensive end, Vic Beasley, last week against the New York Jets and the early results were encouraging. Adding him to a group that includes Maxx Crosby and Clelin Ferrell means that the Raiders have the personnel needed to get pressure, it’s just up to defensive coordinator Paul Guenther to find the right way to dial it up.

One word you won’t hear when people describe the Colts offense is explosive. They rank just 23rd in passing plays over twenty-five yards and Phillip Rivers, who has never been one for super explosive plays, is starting to show signs of age.

The Colts are much more effective when they are ahead of their opponents, letting their offensive line control the ground game and their defense stifle any comeback attempts.

If the Raiders can get out to a lead early, it will force the Colts to play from behind which is a position that they are less comfortable in. It will help negate the Colts offensive line dominating the line of scrimmage, as they will have to take to the air instead of pounding the ball on the ground. The Raiders have scored three touchdowns over the last three first quarters they have played, and getting another one in the first quarter against the Colts would go a long way.