Colts hope Philip Rivers will stay in Indianapolis for a couple more years, at least 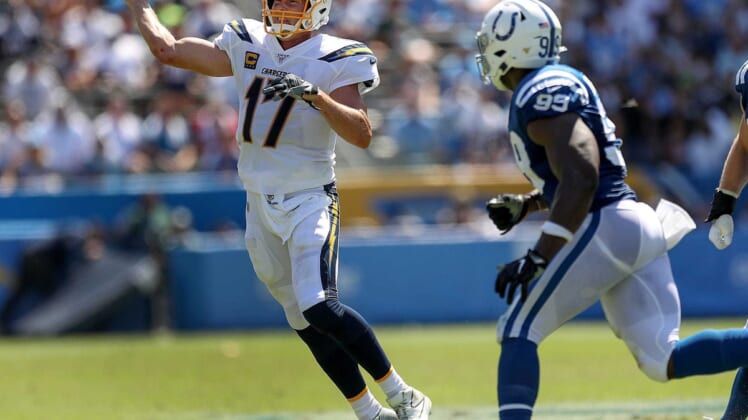 Chargers quarterback Philip Rivers gets the ball away as he is pressured by Colts defensive end Justin Houston on Sept. 8. r Indianapolis Colts Play The Los Angeles Chargers In Their Nfl Season Opener

When Philip Rivers inked a one-year contract with the Indianapolis Colts, many eyebrows were raised. After all, Rivers has been thinking about retirement in recent years. Is he really only interested in one more season as an NFL quarterback?

After he signed, Rivers was then named the head coach-in-waiting at an Alabama high school. That only further fueled the notion that Rivers may not play past the 2020 season.

However, Rivers recently made it clear that the one-year deal wasn’t indicative of his state of mind regarding his NFL future.

“I think it’s a one-year-at-a-time deal at this point, when you get to 38 and you’ve played as long as I have,” Rivers said of his opportunity with the Colts, via the Associated Press. “I think you take it one year at a time. We hope it’s more than one year, but I think it’s one year at a time and go from there.”

Of course, the only real reason the Colts would welcome Rivers back in 2021 is if he had a productive, winning season in 2020. That’s no sure thing based on the way Rivers played last season as a member of the Los Angeles Chargers. He had one of his worst seasons as a pro, completing 66% of his passes for 4,615 yards with 23 touchdowns and 20 interceptions.

Head coach Frank Reich, who coached Rivers as a member of the Chargers, doesn’t believe the quarterback has hit any kind of physical wall, however.

“Just having been there on the inside for the three years I was and knowing the quarterback position like I do, I was so confident that physically he was the right player and that he had not lost anything,” Reich said, per the team’s official website. “All of the throws I saw on film and as I go back and studied him compared to previous throws, I really didn’t notice any physical gifts diminishing at all.”

One of the most prolific quarterbacks in the NFL for the past decade-plus, Rivers may bounce back in a big way in 2020.

A big reason Rivers has a chance to shine in 2020 is that the Colts have an absolutely loaded roster.

Up front, the offensive line is a huge upgrade compared to what Rivers played behind in Los Angeles. Indy has two outstanding running backs in rookie Jonathan Taylor and Marlon Mack. The receiving corps is potent, with T.Y. Hilton and rookie Michael Pittman Jr. Tight end Jack Doyle should feast playing with the tight-end-friendly quarterback.

The recipe for success is on the table. Now we get to see if Rivers and Co. can put it all together.