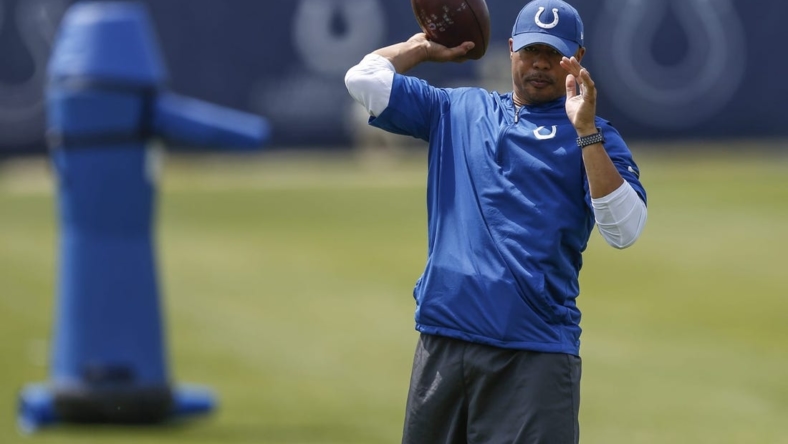 Offensive coordinator Marcus Brady was fired by the Indianapolis Colts on Tuesday in the aftermath of a quarterback change and second consecutive loss.

Brady, in his fifth season as an assistant with the Colts, was named offensive coordinator in 2021.

Indianapolis has 26 total points the past two games, resulting in losses to the Tennessee Titans (19-10) and Washington Commanders (17-16).

“This was an incredibly hard decision, but one I felt needed to be made in the best interest of the team,” head coach Frank Reich said in a statement. “I appreciate Marcus’s commitment to the organization, and he made a significant contribution to our offensive success over the last five seasons. I wish him the best moving forward.”

The Colts (3-4-1) are on the road the next two games — at New England and Las Vegas — before hosting the Philadelphia Eagles (7-0), but there could be much to address for Reich.

Colts owner Jim Irsay met with Reich and general manager Chris Ballard after the team flight home from Nashville two weeks ago looking for stability in the offense.

But the one constant for the Colts in recent seasons has been change at quarterback.

The revolving door shuffled Matt Ryan to the bench the day after Reich’s meeting with Irsay. Ryan, acquired via trade from the Atlanta Falcons, replaced Carson Wentz (dealt to Washington), who was a one-year stopgap upon the retirement of Philip Rivers. Rivers lasted one season (2020) and pushed 2019 starter Jacoby Brissett to the bench.

Andrew Luck had 39 touchdowns and 10 wins in 2018 before his unexpected retirement the following summer.

With Ryan benched, Indianapolis turned to Sam Ehlinger at quarterback in Week 8. He completed 17 of 23 passes for 201 yards but the Colts dropped to 30th in the NFL in points (16.1 per game) and lost more ground in the AFC South division to the Titans (5-2).

A running game expected to be one of the NFL’s best spun its tires and now rates 29th in the NFL at 87.8 yards per game and 3.71 yards per carry. Touted MVP candidate Jonathan Taylor has fumbled twice and scored only one rushing touchdown, which came in the regular-season opener at Houston, in six games.

Brady, 43, had been a part of the QB churn since was hired by the Colts in 2018 as assistant quarterbacks coach. He was the team’s quarterbacks coach from 2019-20 before being promoted to offensive coordinator.