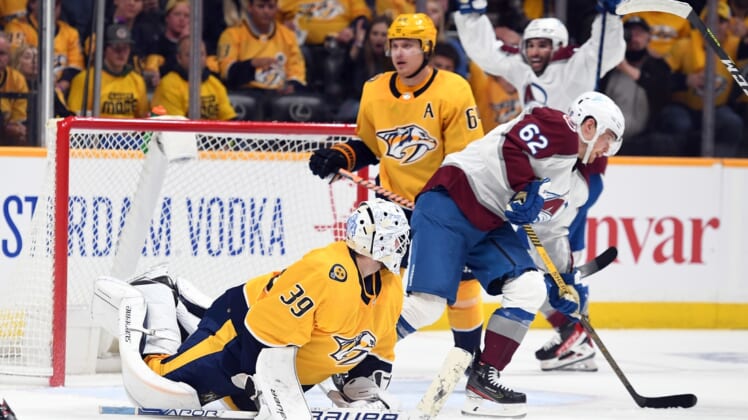 Gabriel Landeskog had two goals and two assists Saturday as the visiting Colorado Avalanche pushed the Nashville Predators to the brink of elimination with a 7-3 defeat.

The Avalanche lead the best-of-seven series 3-0.

Colorado goalie Darcy Kuemper left the game with 57 seconds remaining in the first period when the stick of Predators forward Ryan Johansen caught him through his mask. He stopped nine of 10 shots. Pavel Francouz came on in relief and made 18 saves.

Matt Duchene, Eeli Tolvanen and Roman Josi scored for the Predators, who have lost the first three games of a series for the first time in franchise history. Connor Ingram made 35 saves for Nashville, but five Colorado power plays were the Predators’ undoing as the Avalanche scored on four of them.

Artturi Lehkonen gave the Avalanche a 1-0 lead on the power play at 10:45 of the first period, deflecting Devon Toews’ point shot at the front of the net.

Nathan MacKinnon doubled the lead with another power-play goal at 16:08, sweeping in a rebound at the top of the crease to make it 2-0.

Duchene got the Predators on the board at 17:37, scoring bar down far side from the left circle to cut it to 2-1.

Tolvanen got Nashville even at 2-2 5:41 into the second period, connecting on the power play, beating Francouz high short side from the left circle.

Landeskog, though, made it 3-2 for Colorado with yet another Avalanche power-play goal when he lifted a backhand over Ingram’s pad at 10:58.

The Predators scrambled back again, though, as Josi tied it 3-3 at 12:54 with a blast from the blue line on the man advantage.

Landeskog put the visitors ahead again at 14:02 when his shot from the outer slot beat Ingram.

The Predators challenged for goaltender interference but the call on the ice stood after video review, sending Colorado back to the power play. Just 39 seconds into that man advantage, Nazem Kadri capitalized on a misplay by Ingram to push the lead to 5-3 at 14:41. The Nashville goalie went behind the net to play the puck but his backhand pass attempt landed on Kadri’s stick at the bottom of the right circle and he had an empty net to shoot at.

In the third, the Predators tried to push, but Toews scored from the top of the left circle to extend Colorado’s lead to 6-3 at 9:33. Valeri Nichushkin scored an empty-net goal at 17:14 for the 7-3 final.