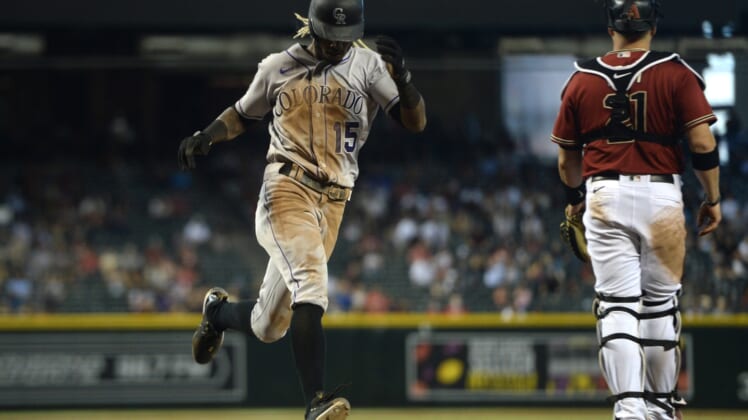 The Colorado Rockies are happy to be home, but they’ll have to wait an extra day to show it.

Monday night’s game between Colorado and the San Francisco Giants was postponed due to inclement weather. The teams will play a pair of seven-inning games Tuesday and wrap up the series on Wednesday afternoon.

San Francisco will start Monday’s scheduled starter Aaron Sanchez (1-1, 2.22 ERA) and lefty Alex Wood (3-0, 1.50 ERA) in the two games Tuesday, but they did not announce in which order they would pitch.

German Marquez (1-2, 4.13), Monday’s scheduled Colorado starter, will pitch one of the games, but the Rockies had yet to announce a second starter Monday evening.

The Rockies made one roster move Monday, placing right-handed reliever Carlos Estevez on the 10-day injured list with a strain on his right middle finger and recalling outfielder Sam Hilliard from the alternate site.

Colorado is feeling a little lucky that shortstop Trevor Story isn’t on the injured list. Story was hit by a pitch on his right index finger in Sunday’s loss at Arizona but X-rays showed no fracture. Monday he was hitting in the cage.

“He was in there hacking,” manager Bud Black said.

San Francisco has not announced any roster moves but manager Gabe Kapler told the media on Monday that he expects second baseman Tommy La Stella to go on the injured list. La Stella, an offseason acquisition, strained his left hamstring in Sunday’s win at San Diego and didn’t return.

“Obviously, he didn’t look good coming off the field,” Kapler said after the game. “Anytime that happens to one of the core pieces of your team, anybody on your team, it’s concerning. For both Tommy and for the Giants, I have concern.”

Wood has made 16 appearances – 13 of them starts – in his career against the Rockies and is 5-3 with a 6.20 ERA. He took a no-hitter into the sixth inning in his last start against Colorado on Wednesday before settling for the win.

Sanchez will make his fourth career start against the Rockies and the third at Coors Field. In his previous outings against Colorado he is 1-1 (both decisions on the road) with a 3.38 ERA. He has put up solid numbers in his two starts in Denver, posting a 3.21 ERA in 14 innings.

Buster Posey, who is having a solid rebound season at age 34, should start one of the two games on Tuesday. Posey, who opted out of the 2020 season, hit just 12 combined homers in 2018 and ’19 but has six in 18 games already this season.

“It’s a combination of a lot of different things,” Posey said after Saturday’s game. “Some of my preparation before the game is working with the hitting (coaches); being a little further away from the hip surgery (from 2018). It’s a combination of all those things coming together. Just trying to get out there and put good swings on the ball each night.”

Marquez is making his seventh start this season, and nearly half of them will have come against the Giants. He has lost both starts against them so far, allowing seven runs on 10 hits with six walks and 12 strikeouts across 9 2/3 innings.

The Rockies are coming off a 2-5 road trip through San Francisco and Arizona and will get right back on the road Friday in St. Louis. Colorado is 2-11 on the road and 8-7 at home this season.