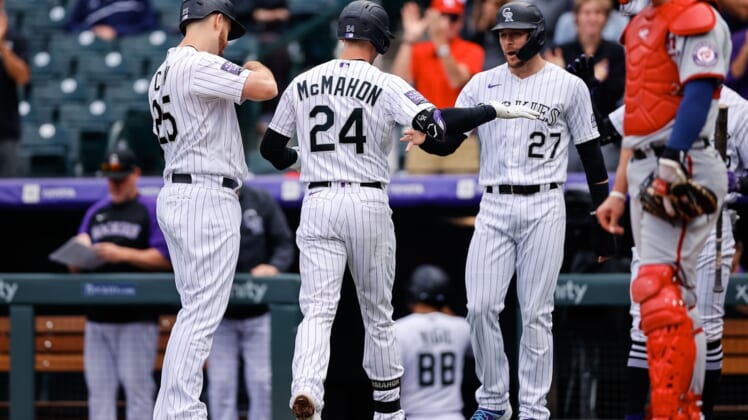 Trevor Story went 4-for-4 in possibly his last home game with Colorado, and the Rockies beat the Washington Nationals 10-5 in Denver on Wednesday.

Ryan McMahon homered and C.J. Cron, Raimel Tapia and Dom Nunez had two hits each for Colorado (73-85) in a game delayed two hours by rain.

Lane Thomas and Josh Bell had two hits apiece for the Nationals (65-94).

Story is going to be a free agent after the season with the expectation he will sign with another team. When the Rockies took the field in the first inning, Story trotted to shortstop alone and received an ovation before the rest of the team ran out.

Washington jumped on starter Peter Lambert in the first inning. Thomas led off with a double, went to third on a single by Alcides Escobar and scored when Juan Soto beat out an infield single. Escobar went to third on the play and scored on a groundout to make it 2-0.

Colorado came back in its half of the first. Charlie Blackmon walked and Story and Cron singled to produce the first run. McMahon then homered to put the Rockies ahead 4-2. It was his 24th of the season.

The Nationals mounted a rally in the third when the rain picked up. Bell and Yadiel Hernandez singled and Luis Garcia doubled to make it 4-3. Yency Almonte replaced Lambert and after getting the first out, he hit Riley Adams to load the bases.

Washington starter Paolo Espino was at bat when the game was delayed, and when play resumed Ashton Goudeau (2-1) relieved Almonte. He struck out pinch hitter Andrew Stevenson, but Thomas drove in two with a single to make it 5-4.

Mason Thompson (1-3) took over in the third and gave up Sam Hilliard’s bases-loaded single that drove in two and gave Colorado a 6-5 lead.

Colorado padded the lead in the fifth on Colton Welker’s pinch-hit RBI double before Tapia singled to drive in another and Brendan Rodgers hit a sacrifice fly.

McMahon’s groundout in the eight drove in Story with the final run.