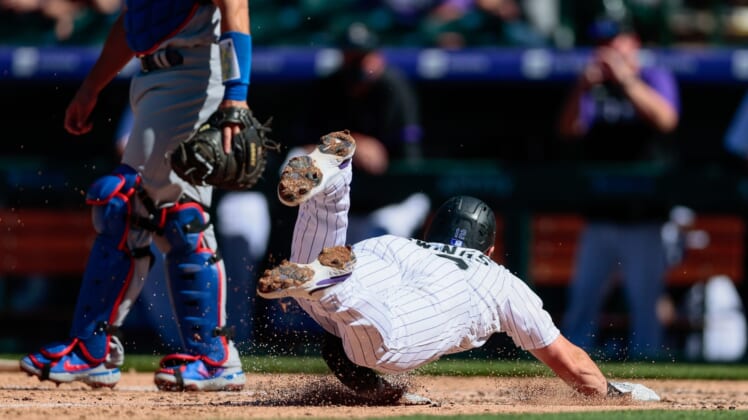 Chi Chi Gonzalez (1-0) got the win with two innings of relief of German Marquez. Colorado’s starter allowed just one run on six hits and walked six in four innings. Daniel Bard pitched the ninth for the save for Colorado.

The Dodgers took the lead in the third on a bizarre play that cost them a run. Bellinger’s drive to the wall in left was initially caught by Raimel Tapia, but it bounced out and over the fence. Justin Turner raced back to first and passed Bellinger. Bellinger was given a run-scoring single and called out for getting ahead of Turner.

The Rockies got to Clayton Kershaw (0-1) in the third. Owings led off with a triple and came home on Garrett Hampson’s safety squeeze. Hampson later scored on a single by Josh Fuentes.

Bellinger led off the fifth with a double and scored on Lux’s single to tie it, 2-2. Colorado came back in its half of the inning. Owings singled, Hampson walked, and both moved up on Gonzalez’s sacrifice bunt.

The Dodgers loaded the bases with no outs in the sixth. Kershaw scored on Turner’s sacrifice fly and Betts came home on Muncy’s single.

The Rockies rallied in their half of the inning with four singles. Tapia’s hit to left made it 6-4, chasing Kershaw.

Los Angeles got a run back in the eighth on Seager’s RBI single.