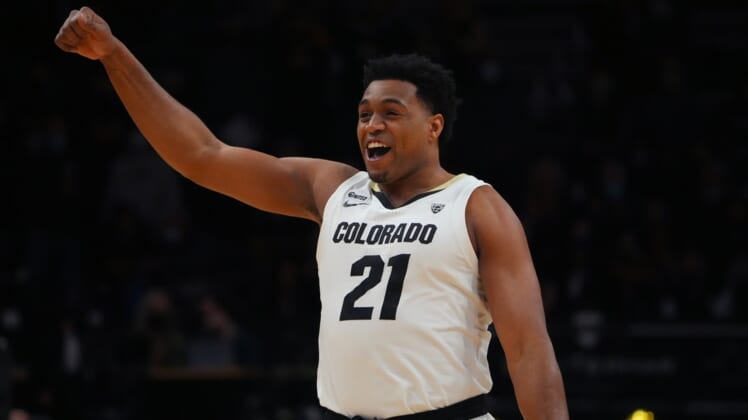 Colorado hoped its win over Arizona and a solid performance in the Pac-12 tournament would warrant a ticket to the Big Dance. Instead, the Buffaloes got the consolation prize, a trip to the NIT for the 12th time in school history.

Colorado (21-11) is a No. 4 seed and will host St. Bonaventure on Tuesday night at Boulder, Colo. The Bonnies (20-9) won eight of their last nine regular season games before losing a heartbreaker to Saint Louis in the Atlantic 10 tournament quarterfinals on Friday.

The Buffaloes return to the NIT for the first time since 2019 when they reached the quarterfinals. Colorado coach Tad Boyle shook off the disappointment of not going to the NCAA Tournament to focus on the chance for his team to keep playing.

“This team, they’re playing really good basketball right now and they’re going to embrace this opportunity,” Boyle said. “They know this is the last opportunity to play together for the rest of their lives, having Evan Battey as a senior and kind of playing for him. These young guys, they’re learning what postseason play is all about.”

Bonnies senior Kyle Lofton missed two free throws in the final seconds in the 57-56 loss to the Billikens, but St. Bonaventure coach Mark Schmidt didn’t blame Lofton for the loss.

“He’s been everything to our program (and) to me as the head coach,” Schmidt said. “He epitomizes everything that we want in a player.”

The Buffaloes won seven of their last eight regular season games — including a 79-63 win over No. 2 Arizona — to finish fourth in the Pac-12 and then beat Oregon in the tournament quarterfinals, before Arizona got its revenge one day later.

Battey (12.3 points, 4.7 rebounds) and Keeshawn Barthelemy (10.9 points) are the only other Colorado players scoring in double figures.