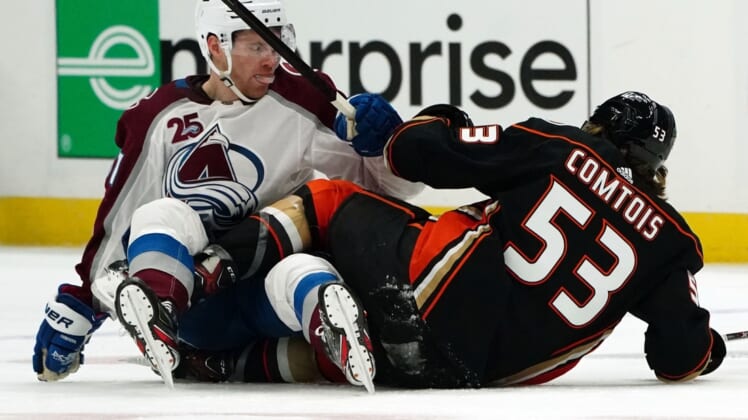 Gabriel Landeskog scored a wraparound goal 1:38 into overtime Friday and the Colorado Avalanche earned a 3-2 road victory over the Anaheim Ducks.

Landeskog had an initial shot on goal to win it, but Ducks goaltender John Gibson reached across the crease to make the save. The Colorado captain was able to regain possession, move behind the Ducks goal and score on the opposite side just inside the post.

Hampus Lindholm and Adam Henrique scored for the Ducks, who lost in overtime for the second time in their past four games. Gibson made 29 saves.

The Avalanche had a chance to snap a 2-2 tie with 11:29 remaining in regulation on a penalty shot by Nathan MacKinnon, but Gibson made a glove save on the attempt. The shot was awarded after Lindholm covered the puck with his hand in the crease in front of the Anaheim goal.

Rantanen gave the Avalanche a 2-1 lead 6:20 into the third period off Byram’s feed. Rantanen has scored a goal in each of Colorado’s past four games.

The Ducks produced a 2-2 tie 1:22 later when their much-maligned second line was able to get on the scoreboard. Henrique scored, with Danton Heinen and Jakob Silfverberg recording assists. It was the first point of the season for all three players.

For the fifth time in five games, the Avalanche jumped out to the early lead. Donskoi delivered on a power play just 2:56 into the contest, Colorado’s 10th man-advantage tally of the season.

Lindholm tied the score 1-all just 47 seconds after the first intermission, blasting a shot off Grubauer’s glove and into the top of the net.

The teams will meet again at Anaheim on Sunday as Colorado closes out a four-game Southern California road trip.