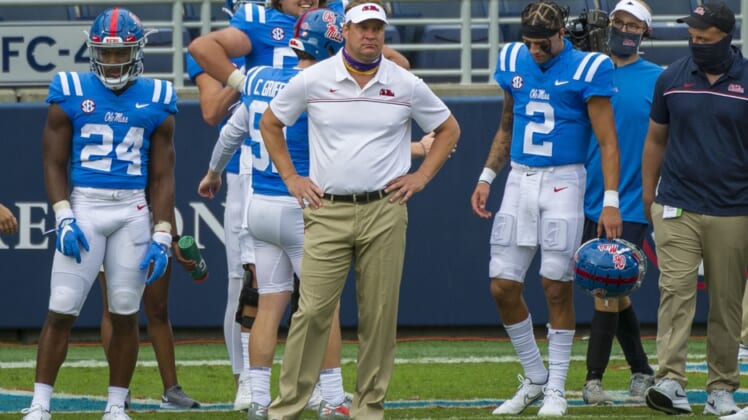 As we look ahead to Week 7 of the college football season, it’s important to recognize the games that helped get us here. From an iconic Red River Showdown that seemingly lasted forever to the undefeated BYU Cougars experiencing a scare, Week 6 delivered some thrilling last weekend.

Now the focus shifts to Week 7, a time of chaos across college football. From games being canceled due to COVID-19 outbreaks to growing hype for classic rivalry matchups, this weekend will be remembered. While Alabama and Georgia might get most of the attention, a few other games are flying under the radar this weekend.

Here are the five most underrated matchups in Week 7 of the college football season.

No. 14 BYU Cougars at Houston Cougars

Many viewed BYU as a sleeper program coming into the season and the Cougars have lived up to the hype. After crushing Navy 55-3 in Week 1, the Cougars came back with consecutive 40-point games against Troy (48-7) and Louisiana Tech (45-14).

Leading the charge is quarterback Zach Wilson. Nicknamed the “Mormon Manziel”, BYU’s star passer finds himself in the Heisman Trophy discussion through four games. It’s hard to knock his merits, with Wilson completing 81% with 1,241 passing yards and an 8/1 TD/INT ratio. However, BYU suffered a scare against UTSA with a slim 27-20 victory.

BYU now faces Houston, who played its first game of the season last week following a COVID-19 outbreak. Houston dropped 49 points in its season-opening win over Tulane, but it does have a few things to clean up after committing five turnovers.

BYU might be on upset alert for its Week 7 matchup. It is a Friday night game, and those tend to get lost in the sea of college football games. BYU boasts the fourth-best defense in the country, but it hasn’t played an offense like this. If Houston mimics its performance versus Tulane, a big Week 7 upset is possible.

Texas A&M is riding high after a monumental win over Florida. The Aggies’ season seemed destined for more disappointment before Week 6. Suddenly, the tides have turned and the nation is buzzing about Jimbo Fisher’s program.

Mississippi State’s season started on an unbelievable note under Mike Leach. Facing the defending national champions, quarterback K.J. Costello looked virtually unstoppable against LSU with an SEC-record 623 yards. Everyone was raving about Leach’s impact on the SEC.

Since then, the Bulldogs lost to Arkansas and failed to score a touchdown against Kentucky. Despite their struggles, they have a chance to play spoiler again. The Aggies are coming into what is known as a “hangover game,” and this may be a dangerous situation versus Leach and Co.

Ole Miss is coming off a 48-point performance against Alabama. This is a remarkable accomplishment, given Alabama’s reputation for boasting one of the nation’s best defenses under Nick Saban. But with Lane Kiffin leading the charge, the Rebels’ offense rolled through the Crimson Tide.

Ole Miss had 647 total yards on offense. Quarterback Matt Corral seemed unstoppable, with just seven incompletions and 365 passing yards. The running back combination of Snoop Conner and Jerrion Ealy added to the Rebels’ dangerous offensive attack, with over 100 rushing yards each.

Arkansas is coming off a devastating loss to Auburn. The controversial backward spike will haunt Arkansas’ fans for the entire season. Despite the difficult loss, this team is enjoying a nice start to the season. The Razorbacks beat Mississippi State and played Georgia well in the first half.

This game is going to be such an entertaining game to watch. Both teams are on the rise and it will be a battle throughout all four quarters.

Both of these teams are coming off bye weeks after difficult losses. UCF had a shocking loss to Tulsa and Memphis is also coming off a rough defeat, losing to SMU by three 30-27. Both these teams will be motivated and well-rested, which is a recipe for plenty of touchdowns.

It is 2020, and it seems so fitting for Florida State to pull off the upset versus a top-five team. To say the Seminoles have fallen short of expectations would an understatement. Florida Sate lost to Georgia Tech in its first game of the season and things just kept getting worse, getting crushed by Miami and struggling against Jacksonville State. Yes, Jacksonville State. The Seminoles ended up winning that game, but they trailed during a key stretch of the game.

Florida State played well against Notre Dame only losing by 16 points. The stats don’t add up to how Florida State will beat UNC. However, it is 2020, and this will be a really interesting game to watch.