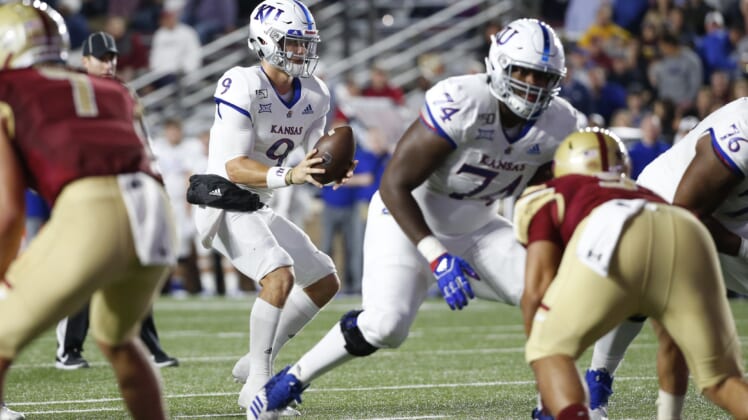 Three big games took over the airwaves on Friday night as college football Week 3 got kicked off, and fans were treated to some impressive performances.

Wake Forest hosted North Carolina to get things started. Around halftime of that game, Kansas and Boston College kicked off in Chestnut Hill. Capping the evening off, No. 20 Washington State took on D’Eriq King and the Cougars in Houston.

All three games provided some exceptional entertainment value. These are the players who stood out for their individual performances.

Based on what Carter Stanley did the first two weeks of this season, there was plenty of noise that he shouldn’t even start in Week 3. At the least, nobody was really expecting him to go supernova on Boston College Friday night. Yet that’s exactly what happened, as this senior quarterback took command of the offense and put on a memorable performance.

Stanley was almost perfect throwing the ball in the first half, completing 13-of-15 passes for 165 yards and three touchdowns.

The senior also showed his heart and will to win when he took on three defenders on a run and came up with a ton of additional yards thanks to a remarkable hurdle. All told, Stanley racked up 261 yards and three touchdowns from scrimmage.

In the process, he helped the Jayhawks break a dubious streak of 48 straight road losses to Power 5 schools.

Wazzu’s offense got off to a slow start, but once Anthony Gordon started getting into a rhythm he put together a magnificent performance leading his Cougars to a huge road win.

Gordon got things going with a brilliant 39-yard touchdown pass to Easop Winston Jr. in the second quarter. From there, he just started dealing strikes all over the field. Gordon also showed some impressive mobility evading pressure and kept his eyes downfield at all times.

The end result was a 440-yard, three-touchdown performance that peaked when his team needed him the most in the second half and fueled a big win for the Cougars.

Welcome to the spotlight, young man. Sage Surratt, going against his older brother Chazz Surratt (a linebacker for North Carolina) on the national stage Friday night, was simply electric. Early in the second quarter, Surratt had already broken Wake Forests’s record for most receiving yardage in a half.

He also hauled in a brilliant 51-yard touchdown to put the Demon Deacons up by three touchdowns, setting another very impressive mark along the way.

All told, this sophomore receiver hauled in nine passes for 169 yards and one touchdown, which proved key to Wake Forest earning the victory.

The Houston defense did an admirable job going against an explosive Washington State offense all night long. David Anenih set the tone early with a sack of Anthony Gordon on Washington State’s second offensive possession.

Then later, in the fourth quarter, Anenih was at it again sacking Gordon for a second time in the game. Coming into this Week 3 matchup, Anenih had just two tackles and zero sacks. He clearly brought his A game for Friday night’s big game.

Since his freshman season in 2017, AJ Dillon has been dominating. His first two seasons with the Eagles he racked up 2,697 yards and 24 touchdowns on the ground. So, it was hardly surprising to see him shred Kansas’ defense Friday night.

He continued to produce in a big way throughout the night, finishing with 151 rushing yards and one touchdown.

It wasn’t always pretty, but D’Eriq King kept Houston in Friday night’s game against Washington State with some big plays in clutch moments.

King, as usual, made big plays both with his arm and his legs. The dual-threat quarterback is lightning fast, and he ran wild to the tune of 94 yards and two touchdowns.

He also threw a touchdown for Houston, which gave Wazzu everything it could handle Friday night.

North Carolina’s offensive line was under siege all night long. Quarterback Sam Howell was a miserable wreck until he started clicking late, and the Tar Heels struggled on the ground. A big reason for all that was that Boogie Basham was a nightmare off the edge leading a dominant effort by Wake’s defensive front.

Basham had 2.5 sacks in the game and now has 4.5 on the season. Just a dominant effort someone we expect to see compete at the next level soon.

This dual-threat quarterback did it all for his team leading a dynamic offensive attack that put up 436 total yards.

Newman got Wake’s scoring started early with a couple of rushing scores.

He’d continue working the middle of the field as a runner, tallying 78 yards on the ground. But it was what he did through the air that really made his night special. Newman passed for 214 yards and a touchdown as well, and his play late in the fourth quarter sealed the win for the Demon Deacons over a scrappy Mack Brown-led North Carolina squad.

Senior running back Khalil Herbert has never been the man at Kansas, and he isn’t the bell cow this year, either. He came into Week 3 with a solid 170 yards and a touchdown, though, and has been a dependable playmaker throughout his tenure at Kansas.

Well, on Friday night Herbert was a shining star. He broke off an incredible 82-yard run late in the second quarter and made the most of every carry. In the end, Herbert finished the game against Boston College with an absurd 187 rushing yards on just 11 carries. He also punched in a touchdown late in the fourth quarter as the cherry on top of his brilliant night.