College football Week 2: 5 best games to watch, including Alabama going up against Texas 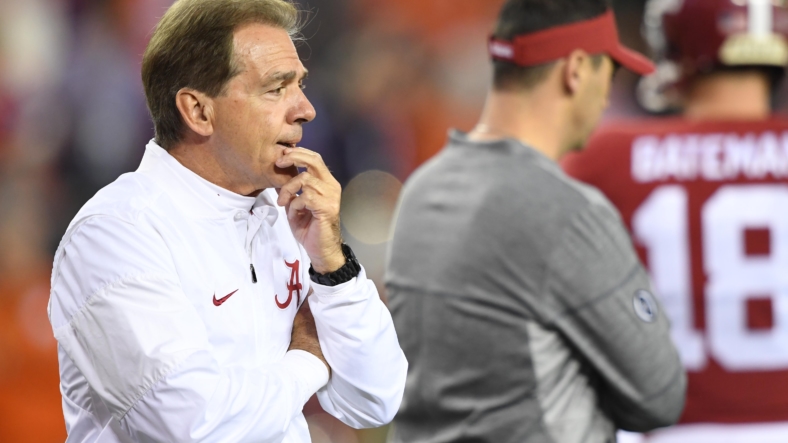 College football Week 2 is upon us. While the schedule doesn’t offer the same huge matchups we saw on the opening weekend, there’s still several games that have to be considered must-watch.

Fresh off a big season-opening win, Tennessee will take on a well-rounded Pittsburgh Panthers squad in a matchup of programs that are looking to become relevant nationally.

Kentucky and Florida will engage in an early-season SEC rivalry game in the Swamp. Is Florida quarterback Anthony Richardson prepared to take the Gators to the next level? Speaking of the SEC, Alabama will go up against the Texas Longhorts in Austin. Out west, Lincoln Riley’s USC Trojans squad will face its real first test of the season against Stanford in Northern California.

Check below as we preview the five-best games to watch during college football Week 2.

Tennessee Volunteers look to make a statement against Pittsburgh

Tennessee was impressive in its 59-10 season-opening win over an inferior Ball State squad. Hendon Hooker opened things up under center, completing 18-of-25 passes for 221 yards with two touchdowns before being pulled in the blowout victory. Now in his second season as the Volunteers’ head coach, Josh Heupel had some praise for his senior quarterback after Hooker put up a tremendous 2021 campaign in Knoxville.

Pittsburgh finds itself in a somewhat different situation under head coach Pat Narduzzi. The program lost quarterback Kenny Pickett to the NFL Draft, but was able to replace him with USC transfer Kedon Slovis under center. The Panthers have legitimate College Football Playoff aspirations. What we saw in the opener against West Virginia did nothing to dispel that notion.

Slovis completed 16-of-24 passes for 308 yards in a great Pitt debut. Akron transfer Konata Mumpfield caught five passes for 71 yards in his first game with the Panthers. Meanwhile, running back Rodney Hammond Jr. added two rushing touchdowns en route to accumulating 129 total yards. This is a well-rounded team. Whether that comes into play with Tennessee as surprising seven-point favorites remains to be seen.

Baylor and BYU do their thing in Provo

Having posted a 21-4 record over the past two seasons, BYU now finds itself in the top-25 heading into a huge game against the Baylor Bears. This home outing in Provo during college football Week 2 comes after the Cougars disposed of South Florida by the score of 50-21 in the opener. BYU’s rushing attack, led by Christopher Brooks, did most of the damage in this one, going for 312 yards. Quarterback Jaren Hall also missed on just seven of his 32 attempts in a solid performance from the junior signal caller.

BYU will face a difficult test against the 10th-ranked Bears. Dave Aranda’s squad opened the season up with a 69-10 win over Albany in a game that they should’ve dominated from the get. Blake Shapen completed 17-of-20 passes for 214 yards before being pulled with the game out of control. It’s his first season as a full-time starter in Waco, and it started out swimmingly.

Baylor has matchups against Oklahoma State and Oklahoma moving forward on the season. BYU will represent only one of three current top-25 teams that the Bears face, including those two other rivals. A win in hostile conditions could set this squad up for a run to the College Football Playoffs.

Kentucky and Florida in the Swamp

Florida’s first game with Billy Napier at the helm couldn’t have gone any better for the program. Replacing Dan Mullen in that role, the former Louisiana head coach led his Gators to an upset 29-26 win over what was then a seventh-ranked Utah Utes team. To put this into perspective, said win represented Florida’s first victory over a top-10 squad since November of 2020. To say Napier was pumped about the upset would be an understatement.

Young quarterback Anthony Richardson was the talk of Gainesville heading into the opener without much experience. He scored three touchdowns on the ground, joining running back Montrell Johnson in putting up an electric rushing attack against Utah.

As for Kentucky, head coach Mark Stoops and Co. really think they have something here. A potential first-round pick in the 2022 NFL Draft, Will Levis opened up the college football season throwing for north of 300 yards in a 37-13 win over Miami (O). However, it’s going to be a much different atmosphere for Levis and the ‘Cats heading into the Swamp. A win here would be absolutely huge for the program.

The Caleb Williams, Lincoln Riley era in Southern California opened up in grand fashion this past weekend. USC took out a much inferior Rice squad by the score of 66-14. The Trojans scored 52 combined points in the second and third quarters alone. Williams completed 19-of-22 passes for 249 yards with two touchdowns. He added 68 yards on the ground in his USC debut after following Riley rom Oklahoma.

After the win, Riley sounded an alarm. The idea is not to be too confident, especially given that it was the season opener and came against a Rice team that has won all of 12 games since the end of the 2016 college football season.

It’s going to be a different ball game for USC going into Northern California to take on Stanford on ABC Saturday evening. Cardinal head coach David Shaw always has his team ready to play. Stanford is coming off a 41-10 win over Colgate to open the season. Junior running back E.J. Smith, the son of Pro Football Hall of Famer Emmitt Smith, was electric in the win.

If history tells us anything, it’s that the Cardinal will come to play in this one. They defeated USC 42-28 last season despite posting a disastrous 3-9 record. In all, Stanford is 5-2 against USC since the end of the 2014 campaign.

Heisman candidate Bryce Young wasn’t necessarily efficient in Alabama’s 55-0 blowout win over Utah State to open the 2022 college football season. He completed just 18-of-28 passes. With that said, Young did score six total touchdowns against a team that was completely overmatched.

Meanwhile, Alabama’s stingy defense held Utah State to seven first downs and a total of 136 in the blowout win. It just goes to show us how stacked the No. 1 team in the nation is.

As for Texas, it is looking for that signature win of the still-young Steve Sarkisian era. In the opener last week, 2021 top recruit Quinn Ewers completed 16-of-24 passes for 225 yards and two touchdowns. It came amid a blowout 46-10 home win over Louisiana-Monroe. Sark and Co. know Alabama is going to be a much different monster.

“Teams can sometimes be enamored with the opponent… The best approach is to focus on what you need to do,” Sarkisian said ahead of the Alabama game. The embattled head coach has a history with the Crimson Tide, too, acting as Nick Saban’s offensive coordinator in 2019 and 2020. You can bet that this will add to what promises to be an electric atmosphere in Austin come Saturday afternoon.