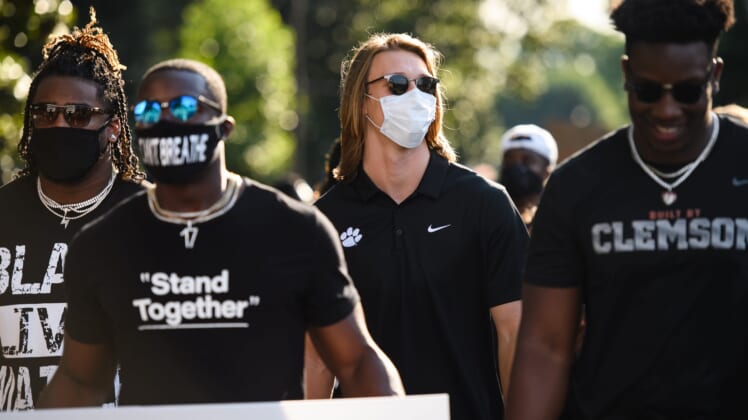 As the 2020 college football season sits on the edge of a knife, the sport’s top stars have banded together. On Sunday night, Clemson’s Trevor Lawrence and Darien Rencher organized a historic Zoom call with other top players from the major conferences around the nation. It led to a unified front on Twitter in the form of a #WeWantToPlay campaign that included a list of demands.

Similar to what the Pac-12 players have demanded of their conference, the #WeWantToPlay movement is centered around health and safety issues related to COVID-19.

Here’s what the players have demanded from their schools:

“Give players the opportunity to opt out and respect their decision

“Use our voices to establish open communication & trust between players and officials; ultimately create a college football players association”

The players who banded together to form this movement are ones you will recognize.

It’s worth pointing out that, while the list of demands does include a desire to unionize, it doesn’t indicate that has to happen before the 2020 college football season can take place.

However, it begs the question: Can college football players actually form a functional union?

That’s a question sports law professor Alica Jessop, who also writes for The Athletic, tackled Sunday night. She wrote on Twitter that it’s “unlikely” to happen due to legal precedence. Instead, what could ultimately happen, in her opinion, is that a “non-union organization likely organized as a nonprofit” could be formed.

Will the 2020 college football season be canceled?

Over the weekend, multiple reports indicated the 2020 college football season is on the brink of crumbling amid the COVID-19 pandemic.

The MAC became the first FBS conference to postpone all fall sports this year due to the coronavirus, and there is an expectation that other major conferences are set to follow in its footsteps. The Big Ten is said to be leading the charge on this potential shutdown amid the COVID-19 pandemic. It has had multiple schools with football programs that were forced to shut down due to outbreaks this summer.