College football players who must step up in Week 6

Week 6 of the college football season features a heavy slate of conference games, and key players will shape the outcomes in these critical contests. We’re highlighting the best of the bunch.

Being included doesn’t mean a certain player has been struggling this year. Some talents fit that description, but others will be expected to propel their respective team in a challenging matchup. Because that works both ways, one player on both sides of a showdown may be spotlighted.

Despite his low output in September, Deon Cain is still Clemson’s best receiver. It’s time for the junior to show that. The Tigers are set to host Wake Forest, which just recorded five sacks and five hurries in a disappointing loss to Florida State. Kelly Bryant is going to feel some pressure from a motivated Demon Deacons squad. But Cain, thanks to his speed and ability to high-point the football, should be a dangerous target in this matchup. A couple of downfield completions to Cain should force Wake Forest to adjust their coverage, and that will create more opportunities for the rest of Clemson’s offense to help secure an important win.

Kyle Shurmur played well in the first three weeks, but his throws have been going all over the place during Vanderbilt’s last two games. That’s not going to cut it when fifth-ranked Georgia comes to town. The Bulldogs recently held Mississippi State to 103 yards through the air and Tennessee to 80 while intercepting two passes in both contests. Further complicating Shurmur’s outlook is the absence of a respectable rushing attack, which is unexpected given Ralph Webb’s consistency in previous years. For the Commodores to have a chance in the fourth quarter, Shurmur may need to propel the offense himself. 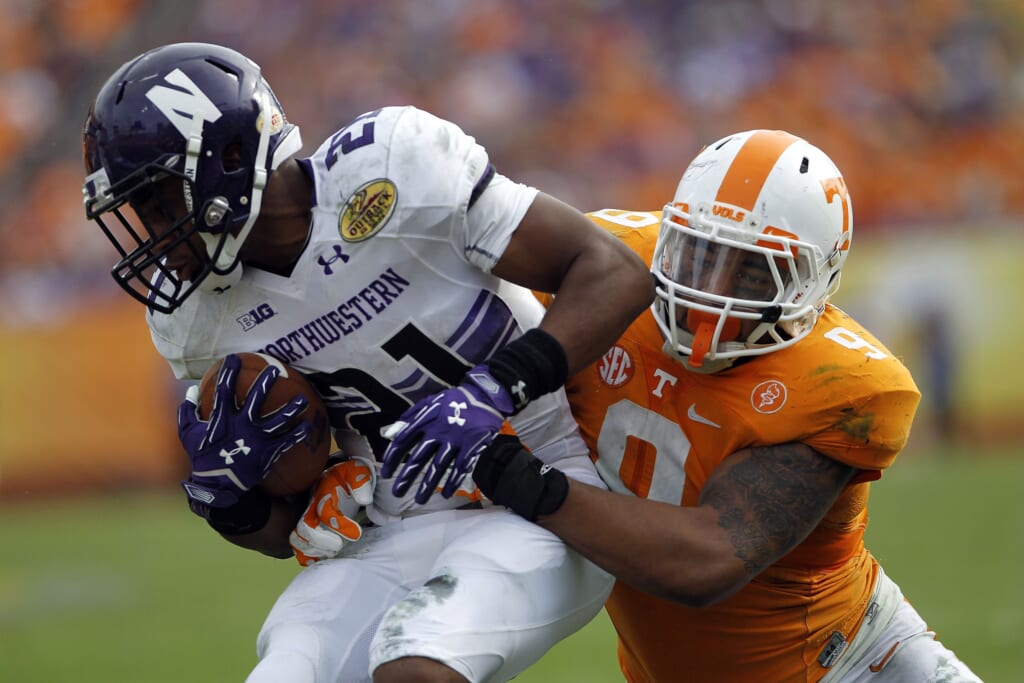 During his first three years at Northwestern, Justin Jackson tallied at least 1,187 rushing yards in each season. That ability has been on display with 100-yard outings against Nevada and Bowling Green, but the Wildcats haven’t provided similar running lanes against their top competition. Jackson mustered 18 yards on seven carries at Duke and 25 yards on nine attempts at Wisconsin. In Week 6, Northwestern faces a Penn State run defense that has ceded just 3.2 yards per carry. For the Wildcats to have any chance at pulling an upset, they simply must give Jackson room to run.

Injuries remain a problem in the Auburn backfield (what’s new, right?), but there is no doubting Kerryon Johnson’s production. In three healthy games, he’s amassed 300 yards and nine touchdowns. According to Lauren Shute of SEC Country, Johnson said he’s feeling about 90-95 percent. So, that makes his outlook for Ole Miss positive in two ways, since the Rebels have the 14th-worst run defense in the country. Provided Johnson is as healthy as he suggests, the powerful runner should have another productive day while bracing a banged-up stable of backs.

West Virginia is listed as a 13.5-point underdog against TCU, according to OddsShark. That’s not much respect for a program that has rattled off 56-plus points in three consecutive games. Will Grier topped the 300-yard mark in each of those outings, accounting for 12 total touchdowns. It’s critical he continues the hot streak because it’s likely the defense will struggle against the Horned Frogs — more on that in a minute. But with a consistent running game supporting Grier, West Virginia has the firepower to keep up if he protects the football.

Kenny Hill has enjoyed a late-college renewal thanks to a shift in TCU’s offensive philosophy. The team is running more often, and Hill is being asked to do less as a passer. After watching West Virginia’s defense for a month, TCU shouldn’t need to divert from that plan. The Mountaineers are surrendering the 16th-most rushing yards per game nationally, and Darius Anderson has recorded 100-yard showings in both games against power-conference foes. That production is important both for its standalone value and to reduce the pressure on his quarterback to shoulder the offensive load, something Hill isn’t suited to do. 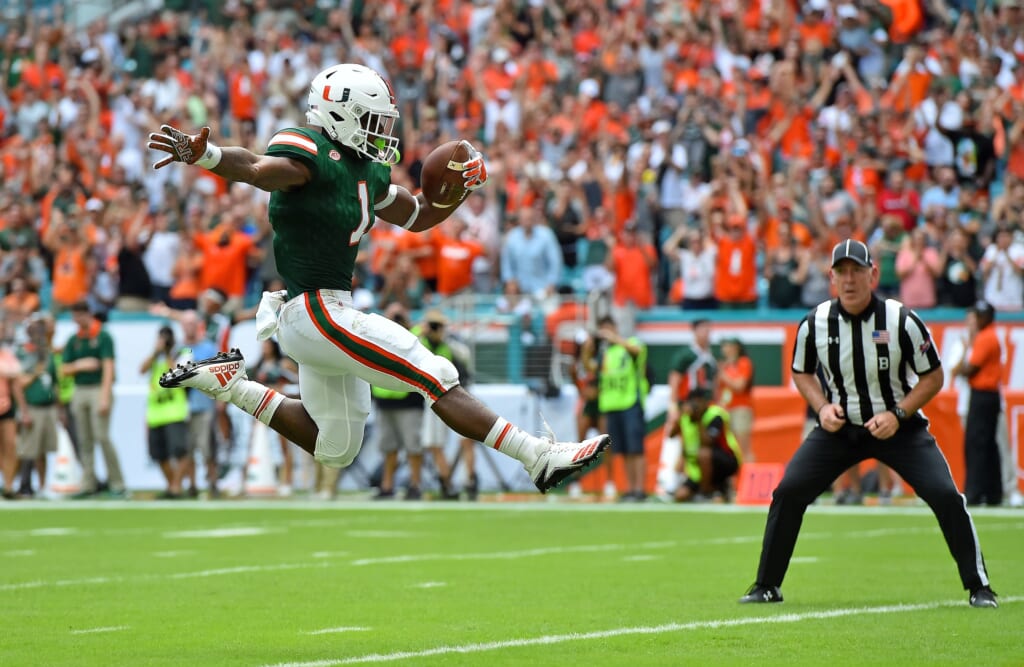 Travis Homer is the player to watch in case of emergency, but the Hurricanes will lean on Mark Walton as much as his health will allow. The junior running back has exited the last two games with an injury scare but practiced fully early in the week, per Susan Miller Degnan of the Miami Herald. Barring a setback, head coach Mark Richt said, Walton will be available to take on the Seminoles. With 9.7 yards per touch through three games, his value to Miami’s offense cannot be overstated. The ‘Canes need a steady day with a couple of explosive plays from Walton to snap a seven-game skid against their rival.

In two games since replacing Deondre Francois, James Blackman has looked like a true freshman who wasn’t supposed to play this year. Sounds about right. Florida State has relied on quick passes to protect Blackman because of his youth, but the offensive line hasn’t afforded much time, either. North Carolina State and Wake Forest combined to tally nine sacks and eight hurries over the last two weeks. Heading into a matchup with Miami, which just tagged Duke for six sacks and four hurries, Blackman must be prepared to handle regular pressure and take advantage of any downfield opportunities.

For better or worse, this is Feleipe Franks’ team now. Possibly. We think. Maybe. Luke Del Rio’s season-ending injury means the Gators are returning the reins to the redshirt freshman, who has flashed his potential but been unable to show it consistently. Franks will lead Florida into a clash against a reeling LSU team, which is looking to bounce back from an embarrassing loss to Troy. If the Tigers can reclaim the defensive prowess they exhibited early in the year, it could be a frustrating day for Franks. Would the Gators then think about bringing in Malik Zaire? Franks must not let the question require an answer.

It doesn’t matter that USC should defeat Oregon State handily even if Sam Darnold has an average game. The Trojans must use this Pac-12 contest as the springboard for a resurgent second half if they’re going to compete for the College Football Playoff. After this matchup, USC hosts Utah and travels to Notre Dame — both of which are currently ranked. Darnold, who has tossed eight interceptions in five games, needs to shake his uneven start and take advantage of playing an Oregon State defense that has allowed 15 touchdowns and the nation’s sixth-highest passer rating. 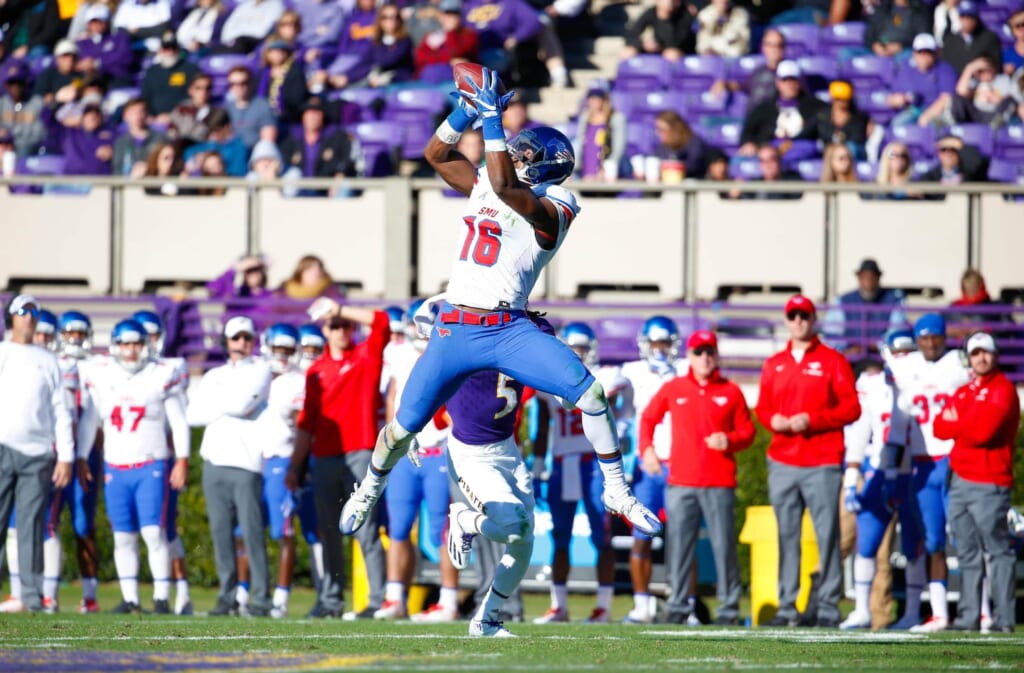 SMU handed a promising Houston squad its second loss in 2016, and Courtland Sutton contributed seven catches for 83 yards and a touchdown during the impressive win. The NFL prospect has been a major factor for the Mustangs in 2017, scoring once in each of their four victories so far. But in the one loss — a 56-36 shortcoming at TCU — Sutton managed a single catch for zero yards. SMU has an excellent opportunity to upend Houston and announce itself as a threat in the AAC’s West Division. That will only happen if Sutton and Trey Quinn succeed against a feisty secondary.

John O’Korn played poorly in an uninspiring win over Indiana last season when replacing an injured Wilton Speight. The backup completed just seven of his 16 passes for 59 yards. But at Purdue during Week 4, O’Korn stepped in for Speight again and looked terrific. He completed 18-of-26 attempts for 270 yards and gave an anemic Michigan offense some life. After having two weeks to prepare for Michigan State, will he back up that showing? The defense will buoy O’Korn regardless, but a couple of costly mistakes could put the Spartans in position to spring the upset.

Last year, LJ Scott put together his best performances when it mattered most. He totaled a season-best 236 yards in a close loss to Ohio State and collected 186 yards from scrimmage against Michigan. Anyone can agree Scott needs to produce Saturday opposite the Wolverines, but it’s especially important given his struggles in 2017. Although the Spartans are 3-1, Scott has managed no more than 86 rushing yards or 5.6 yards per carry in a game. Michigan, meanwhile, has surrendered a meager 2.2 yards per attempt. Unless Scott can help MSU establish the rushing attack, the Wolverines should have little trouble shutting down their rival. 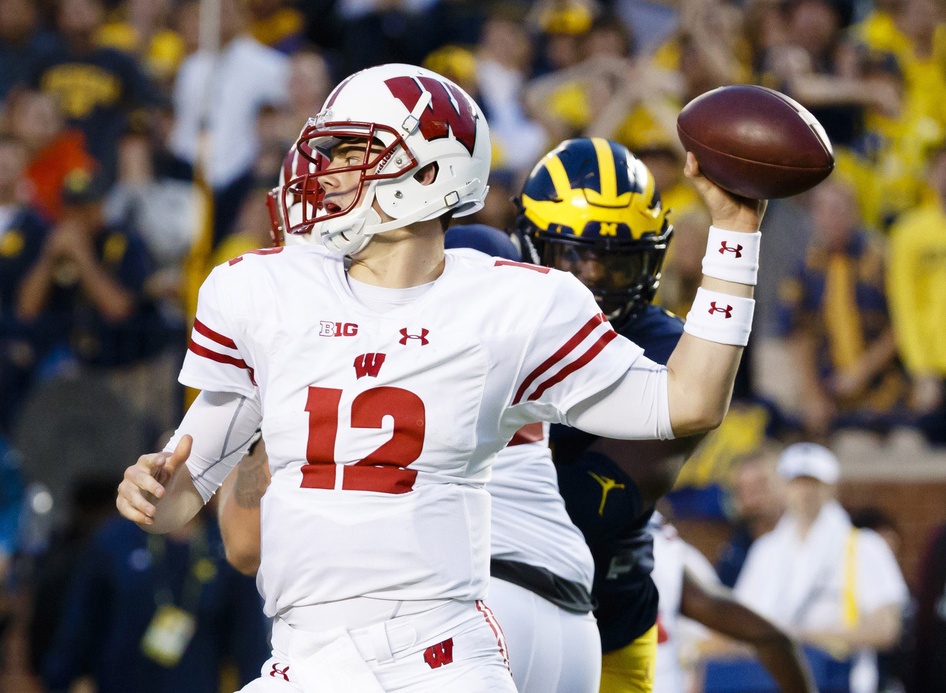 Wisconsin is a sneaky choice to finish the regular season undefeated. In fact, ESPN’s Football Power Index gives the Badgers no worse than a 75.8 chance in each remaining game. Whether they can fulfill that statistical outlook relies heavily on Alex Hornibrook. Although the sophomore quarterback has clearly improved compared to his freshman campaign, his two interceptions in Week 5 against Northwestern offered a reminder about his current limitations. Nebraska should hang around with Wisconsin, but Hornibrook can ensure the Badgers are never in an unfavorable spot during the fourth quarter. Avoiding mistakes that lead to easy points is crucial, especially on the road.

One thing we know: Starting quarterback Justin Herbert has a broken collarbone. One thing we don’t know: Will Royce Freeman play against Washington State? No matter if he does, Oregon will demand production from the running backs as an inexperienced signal-caller stands behind center. Freeman has three 150-yard games this season, while Kani Benoit amassed 138 yards and Tony Brooks-James chipped in 76 after Freeman’s injury last week. The Ducks need their depth at running back to carry the offense; otherwise, the Cougs will cruise to a victory in their first road game of the campaign.

Colorado’s prove-it year hasn’t gone particularly well. Steven Montez tossed three interceptions in a blowout loss to Washington and mustered just a 47.2 completion percentage when Mike MacIntyre’s crew fell to UCLA. The Buffs are already basically an afterthought in the Pac-12 race, but they don’t want to miss the postseason entirely. At 3-2, Colorado is in decent shape to reach a bowl. However, a loss to Arizona would shift that narrative. Montez must not waste what should be a quality performance by the defense at home opposite a one-dimensional Arizona offense.

Darren Carrington has shined since arriving at Utah. He registered 127-plus yards in the first three contests of 2017 and grabbed four passes for 76 yards last week. But now, the Oregon transfer will probably be catching passes from a new quarterback. Starting signal-caller Tyler Huntley is uncertain for the Pac-12 clash with Stanford, according to Dirk Facer of the Deseret News. The Utes would turn to Troy Williams, who started last season when Carrington was still with Oregon. Stanford is a respected opponent, but the secondary has surrendered an uncharacteristic number of explosive gains this year. Carrington’s big-play ability could swing the game in Utah’s favor.